The 505th Joint Fighter Wing "Mirage Witches" are based at Carpathian Mountains in the southern part of Ostmark. Their main objective is a border surveillance mission around the Carpathian Mountains. They have been retreating from time to time again. After the fall of Ostmark the 505th Joint Fighter Wing's headquarters often changed (Tsaritsyn, Rostov, Kharkiv and finally south across the Caspian Sea to the Absheron peninsula) They then later received support from Fuso and were able to regroup themselves to face against the Neuroi. The reason they were being called the "Mirage Witches" is because of how good they were in retreating battles. It is also said that Kuroe Ayaka had temporarily being stationed in this team for quite some time before being transferred to another unit.

Member for an unknown period 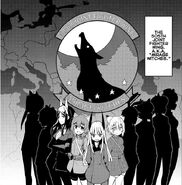 505th in Contrail of Witches
Add a photo to this gallery
Retrieved from "https://worldwitches.fandom.com/wiki/505th_Joint_Fighter_Wing?oldid=26080"
Community content is available under CC-BY-SA unless otherwise noted.