Adolfine Galland is a Witch from Karlsland attached with the Karlsland Air Force. She is a high-ranking Witch, holding a General rank.

She receives a deep trust from the Karlsland Emperor Frederick IV and has gained the permission to freely organize units for the sake of the recapture of Karlsland. Due to that position, Adolfine has a great influence not only in the Karlsland Air Force, but also in the Allied Air Force that employs Witch units. Using this authority, she smoothly implemented the reformation of the 501st Joint Fighter Wing in Romagna.

Her familiar appears to be something of the cat-lineage, but its origins are unknown.

Born in Westerholt, located at the northwest of Karlsland, interposed between the Rhine and Weser rivers.

When the conflict in Hispania that preceded of the full-scale invasion of the Neuroi erupted, Adolfine participated on as a member of the Condor Legion sent from Karsland. But differently from what she hoped, she was round up exclusively for the ground attack. During that time, she accumulated real combat experience and framed detailed reports not only on battle techniques, but also regarding logistics such as supplying and maintenance.

Afterwards, she was sent to the Fuso Sea Incident as an observing officer, but ended up participating in the combat herself upon witnessing the fight between the flying-type Neuroi and the new model Striker Unit. This made her admiration for the flying Witches grow stronger.

After returning to her country, Adolfine put out an application for being transferred to the Air Forces. However having achieved countless military results in the ground attack ended up backfiring on her. Not only was her request denied, but she was instead put in charge of the crew training and organization structuring for the establishment of a ground support unit.

Not giving up, she repeatedly proposed a transference to the combat troops, which eventually bore fruit with her transfer to the Jagdgeschwader 26 (JG26). After her promotion to Squadron Leader, she was appointed as commander of the JG26 fighter-wing.

In the future, Adolfine will be promoted to Air Marshal and establish the Jagdverband 44 (JV44), a test unit of Jet Strikers under her direct command newly organized by Adolfine's personal request to the Emperor for the European recapture operations. Even after leaving the front lines, she still adheres to a hands-on approach, doing things like performing test flights herself or sortieing regardless of the fact that she already unable to deploy her magic shield. The Emperor has forbidden her from sortieing, but because there are also incidents like the above-mentioned, it appears that her actual shot-down count is greater than what was announced publicly. At any rate, she will continue to repel the Neuroi and achieve many military results in the Karlsland recapture operations.

Adolfine is also famous for the behavior of saying whatever she wants, like at the occasion when, back at the time that she was an active-duty Witch in the Karlsland evacuation war, she turned to an Air Chief Marshall and declared that she wanted a (Britannian-made) Spitfire Striker Unit, a wish that was apparently granted at a later date.

When the top brass once asked her if there was anything she wanted, the name of Lynette Bishop from the 501st JFW came out.

Adolfine's inherent magic is a Magic Eye (魔眼, magan) much like that of Sakamoto Mio. However, she must employ the GwZF4 sniper rifle scope that she carries on her neck in order to activate it. By "peering into" the scope and restricting her field of vision, it assists in her mental concentration and raises her accuracy. Since magic effects are considerably influenced by one's mental condition, cases such as this are by no means something unusual.

A superior Witch that boasts a shot-down count of 103 units. But more than that, Adolfine is a capable commander that can easily handle weapons development and production, the organization and management of bases and Witches teams, and the coordination between each nations' headquarters. Also, her understanding of new technologies is deep.

In the Fuso Sea Incident, she employed an early-production model of the Bf 109E equipped with a new DB-601 engine. The personal unit of (at the time) Wing Commander Galland was a Bf 109F-2 Special in which all sorts of remodeling were performed. 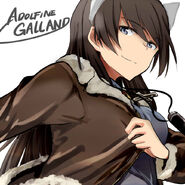 Adolfine in Fuso in 1937
Add a photo to this gallery
Retrieved from "https://worldwitches.fandom.com/wiki/Adolfine_Galland?oldid=23521"
Community content is available under CC-BY-SA unless otherwise noted.