Adriana Visconti (アドリアーナ・ヴィスコンティ) is a Witch of the 506th Joint Fighter Wing, originating from Romagna.

She is part of the now fallen Visconti family that used to be the governing family of Milano. She has made herself a reputation of a great commander in Romagna, she is a brave fighter with charisma. She is obviously extremely talented but she is slightly self-righteous. She has a strong determination to protect her country. That is why she refuses to listen to orders she thinks to be irrational and continues fighting, this is the main reason she has so much trouble with higher ups.

When she volunteered to the army and became Pilot Officer, she was first put in the ground attack forces and due to repeated military regulation violations she was sent to a remote region, in to the 50th aviation company, 12th group, 159th flying corps in Tobruk. After a while she got back into her home unit for her great efforts such as destroying Neuroi with her ground attack strikers. She was Flight Lieutenant at that time.

When she was demoted to Tobruk, Flight Lieutenant Marseille was there also, but she was transferred somewhere other than her home unit before Adriana arrived, so they never met each other. During that time many jokes were going around about whether these two had liked or hated each other if they had met.

Adriana was assigned into the 76th flying corps, which held high opinions for people with great talent in flying. She got important duties as a dogfighter and reconnaissance photographer. Here she distinguished herself by growing her kill count and she matured to be an excellent commander. But because of her rebellious attitude towards the higher ups and numerous violations of military regulations, she wasn't recommended for the Romagna's pride, Red Pants.

When the 504th Joint Fighter Wing was formed she wasn't let into that either, instead the upper stratum put her in the 506th JFW, in an act which seemed like getting rid of a troublesome person. 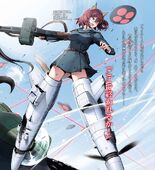