Aleksandra Ivanovna Pokryshkin (Александра Ивановна Покрышкина) is a witch of the 502nd Joint Fighter Wing, Captain from the Orussian Army's 216th Fighter Aviation Regiment, and Orussia's top flying ace. She is referred to as "Sasha" by her friends.

Orussia's top Ace. She serves as the 502nd JFW combat commander. She is known for being a great commander and tactician. She is mostly active on the front lines in the south, and flies repainted brown MiG-60 striker units.

Thanks to her engineer father, she became familiar with mechanics early in her childhood and her mechanical skill is top-notch. Initially, she was thinking of becoming a mechanic or technician.

Unlike other in other nations, she studied air combat tactics and technology on her own because air combat technology was not very developed in Orasha at the beginning of the war. In particular, she learned form the textbook made by Reine Fonck. For this reason, she has a high affinity with the Gallian witch, and Orussia has been close to Gallia and has actively scouted the Galian exiled witches. Pilot Officer Lemare of was also invited directly.

Thanks to her personal military achievements, and her tactical textbook based on her experiences during the evacuations of Karlsland and Orussia, she is highly valued as a combat instructor. Her book is easy to understand even for newcomers, and quickly spread throughout the country. She is also very enthusiastic about sharing information and tactics between different combat units.

She was invited to the 502nd Joint Fighter Wing, which was established after Operation Barbarossa, serving the role of combat commander. The 502nd's primary duties are the recovery of Karlsland territories and serving as the front-line defense for the rest of Europe from enemy aggression. This, in addition to the "vigorous fighting spirit" of her unit's witches leads to an extremely high attrition rate for strikers.

Because of the Orussian evacuation efforts she constantly struggles to get equipment, even from Liberion who are providing supplies; the fact that every time her unit sorties someone manages to destroy a striker unit proves to be a massive headache.

Aleksandra is structured and sometimes perfectionist, often acting as foil to the hijinks of Krupinski and the carelessness of Katajainen. With Nikka, Aleksandra is portrayed as especially close; despite the constant headache of having to repair Nikka's broken units, it has brought them together in a certain "care-taker" sort of way.

Aleksandra's inherent magical ability is known as "Image Memorization"; when her magical ability is used it allows her to remember and never forget anything and potentially everything from complicated Technical Plans to her breakfast 10 years ago; though this is only the case when she uses her magic on when she views and experiences things; upon activating her ability in such instances she will remember and never forget. Her ability provides her with many technical details to a degree better, deeper and more technical than from normal recollection of memory for most people, possibly even better than photographic memory as she can remember such details and experiences easily and at will if she uses her magic to recall such details and events.

During the Orussia evacuation battle, the Orussian equipment was not ready, and the witches fought with old-fashioned striker units supplied by Liberion, like the Bella P-39.

Her MiG i-225 is the third prototype that got tuned for daytime combat. 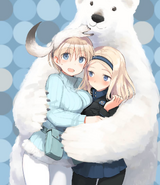 Retrieved from "https://worldwitches.fandom.com/wiki/Aleksandra_I._Pokryshkin?oldid=21605"
Community content is available under CC-BY-SA unless otherwise noted.