Amelie Planchard (アメリー・プランシャール) is a Witch of the Isle of Wight Detachment Group, originating from Gallia.

Born to a farming family in Normandy, in Northwest Gallia. She developed her witch powers at an early age, but because she was in a small village, neither her family nor the residents knew how to interact with the witch. She was later discovered by an official of the witch candidate Scout who had been traveling around. As the first witch in her family line, she was sent away to a national training institute where she lived alone, away from her family, a difficult experience for such a young girl.

During the Neuroi invasion of Gallia, she was still a trainee witch undergoing final tests, and thus did not participate in any of the actual fighting. After the fall of Gallia she moved to Britannia with operation Dynamo, where she received training with the Forces Aériennes Galliaises Libres, and became a formal Air Infantryman. Her uniform and striker (a Spitfire Mk. V) and the training facilities she uses were all provided by Britannia. Her magical powers are not low, and she had excellent results in class, but she was noted for not being assertive enough.

Planchard flew as the wingman to Flying Officer Perrine H. Clostermann (a Pilot-Officer (Sous-Lieutenant) at the time) while the two were deployed to a defensive fighter unit at a Britannian airbase. Shortly after Perrine was transferred to the 501st Joint Fighter Wing, she was transferred to North Africa. She was repeatedly shot down here and was transferred to Britannia again, where she was assigned to the Isle of Wight Detachment Group.

After the dissolution of the Isle of Wight Detachment (at the end of the anime first season), she rushed to help Perrine reconstruct Gallia with Wilma Bishop and many other witches. She later relocated to the Clostermann family in Pas de Calais and cooperated with Perrine reconstruction project.

A very emotional person, her eyes well up with tears at any show of strong feelings. She is a pampered girl who cannot stand to be alone. Planchard appears to be deeply moved by something she sees in Flying Officer Clostermann, and in the way she always forges ahead recklessly, even at the cost of losing everything. 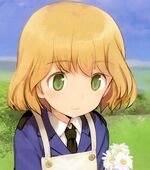