Anne De Gaulle is the youngest Daughter of General Charles De Gaulle, whom the General is deeply caring and attentive to.

She was born with an incurable disease, and thus confined to a wheelchair for mobility.

She was responsible for the creation of the 506th official Mascot: "Mr. Nobel". She wanted to create the mascot in order to help the witches in whatever way she could, and was delighted when her design was chosen to that end. 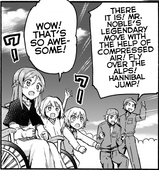