The story depicts events before the anime "Brave Witches". At the forefront of defending humanity from the invasion of Neuroi, the 502nd Joint Fighter Wing is created in Petersburg. This prequel begins by following three new members of the 502nd; Kanno Naoe, Waltrud Krupinski and Nikka Edvardine Katajainen.

Brave Witches Prequel: The vast land of Orussia (ブレイブウィッチーズPrequel オラーシャの大地): Kanno Naoe, an Ace Witch from the Empire of Fuso, is transferred to the 502nd JFW in Petersburg. Krupinski and Nipa, who joined at the same time, spent every day competing for the higher number of shot downs in the unit. Their cooperation was very bad during combat. "Hey, don't steal people's prey!" While the three were struggling with the outcome of a battle, an unprecedented super-large scale Neuroi attacks!

Brave Witches Prequel 2: The illusion of Orussia (ブレイブウィッチーズPrequel2 オラーシャの幻影): Two new Witches from Gallia and Fuso join the 502nd JFW, which was launched as an elite unit. Gundula Rall decides that the time is ripe and prepares for a full-scale invasion operation, but Nipa becomes ill and crashes on the shores of Lake Ladoga. A recovery unit, lead by Aurora E. Juutilainen, saves Nipa from certain death.

Brave Witches Prequel 3: Orussia's distant thunder (ブレイブウィッチーズPrequel3 オラーシャの遠雷): A joint operation between the Suomus Independent Squadron and the 502nd Joint Fighter Wing was planned in sping 1944 to defend northern Orussia. There were 502 members swayed by repeated sexual harassment and abuse by Misfits Squadron commander Sakomizu Haruka, but the morale of the unit increased as the first joint operation was carried out. During a seemingly successful operation, the Witches are attacked by a humanoid Neuroi that appeared suddenly and finds themselves in a situation where they cannot succeed. What decision will take the brave Countess in this unprecedented squadron crisis?

Brave Witches Prequel 2 drama CD: A limited edition of volume 2 contained an audio drama CD as well. This is the only piece of media where Huberta von Bonin has been voiced. One day in 1943; the commanders of the 501st, 502nd, and 503rd JFWs gathered in Suomus to form a joint conference. "I, Gundula Rall, will also go to Helsinki base with the teacher and the Countess. According to top-secret information obtained by the intelligence department, it seems that Minna will bring Hartmann and Barkhorn to escort her. Countess is a woman who taught Hartmann how to have fun. It would be perfect to pull her into my team." 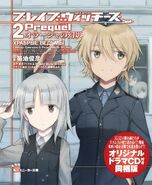