Brave Witches VR: Operation Baba-Yaga - Counter attack in the snow (Bureibu Witchīzu VR: Operation Baba_Yaga - Yuki chū geigekisen) is a VR game developed by Production IG for PC and later ported to PlayStation VR. The game was not very well received, and had one of the lowest ratings on the Japanese PlayStation store after its release. The main complaints were about visuals, which are very blurry and lacking detail even on a PS4 pro, despite looking sharp in the official PlayStation store screenshots. Players also complained that, due to the lack of controls, it felt more like an interactive anime compared to an actual game. Most glaring of all, there was a distinct lack of VR focused game play, despite being promoted and sold as a "VR" title, as combat and flight was still experienced from a third person view.

The main part of the game is a rail shooter. The camera follows Hikari as the girls sortie to complete missions. The player controls the camera, and where Hikari is aiming to, by moving the VR headset. The goal is to defeat as many Neuroi as possible. The player also has to choose which branch of the route to go. Because other characters attack the Neuroi as well, and Hikari sometimes attacks even without the player doing anything, it is possible to complete the levels without any player inputs.

An "Extra Sauna mode" was later added as a free update, most likely due to the poor reviews from players and fans alike. In this mode, the player is sitting in the back of the sauna, and observing the girls who get in the sauna for a short amount of time and perform random animations. There is only one girl at a time in the sauna. The girls behave as if the player is not here.

Promotional art for the game 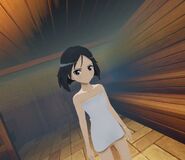 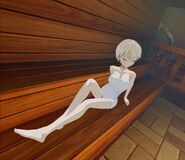