She was the Commanding Officer of Jagdgeschwader 27 Gruppe I at the time Marseille and Pöttgen were assigned to that unit.

Although not apparently a member of the 31st Joint Fighter Squadron Afrika herself, (JG27 providing logistical support and a base of operations for the unit) it is highly likely that that the Storm Witches report to higher command through her.

She is one of the highest-ranking Witches, and the overall Commander of all Witches in North Africa.

She is apparently very involved with the logistical and communications side of Witch operations in the area, probably planning many of them herself.

She seems to report directly to Rommel.

She has a stern and strict personality, intent on following rules & regulations. A good word to describe her would be strategic.

She does not seem to be very flexible in that she prefers to carry out operations as they were planned, without any deviations. Rommel's suggestion of changing a planned operation while it is in motion leaves her shocked and she clearly opposes such action, though she ultimately follows his advice.

She desires that her Witches behave in a proper, military manner. She does not seem to have a favorable impression of Marseille and reprimands her for being so uncouth.

She expects only the best from the Witches under her command, questioning Marseille's abilities as a 'first-rate Witch', suggesting that she perhaps overestimated the Star of Africa's abilities and stating that she didn't want her to look like an embarrassment.

Though on the face of it her comments to Marseille could be seen as mean-spirited, it's clear that she is using the Star of Africa's ego to her advantage. By questioning her abilities and suggesting that her highly-public image is at stake, Neumann is both trying to reign in her subordinate and push her to achieve more at the same time. Clearly she is a commander who knows what makes the Witches under her command 'tick', and also knows best how to use those factors to a military advantage.

She is based on Eduard Neumann. 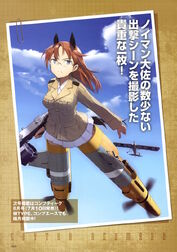 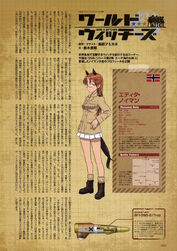 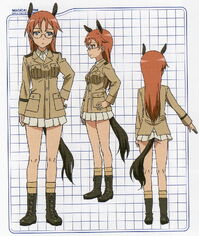 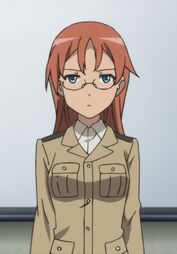 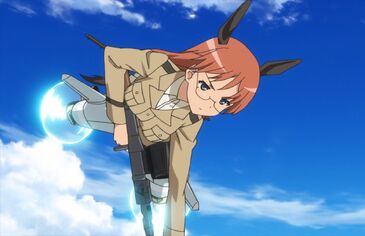 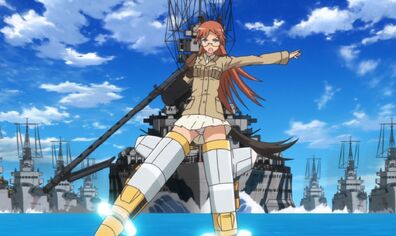 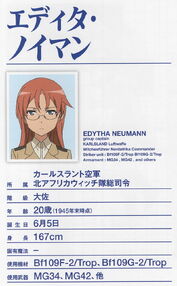 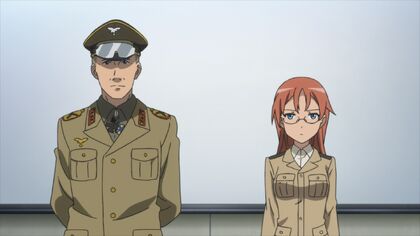 Retrieved from "https://worldwitches.fandom.com/wiki/Edytha_Neumann?oldid=26600"
Community content is available under CC-BY-SA unless otherwise noted.