Edytha Roßmann is a veteran witch of the 502nd Joint Fighter Wing, originating from Karlsland.

A veteran witch with a lengthy military service record. Despite having a confirmed kill count of less than 100 Neuroi. While this is not uncommon in the Karlsland Air Force, her ability is still evaluated as that of a top ace.

Born in Gera near the border of Ostmark in the middle of Karlsland. She suffered a serious illness when she was a child, her body growth was delayed, and she was short and did not have much physical strength.

She was aiming to become an aviation witch due to the early emergence of her magic abilities, but was unable to meet military recruitment standards due to her low physical strength. Despite giving up at first, the military, which was forced to increase the number of witches due to the mysterious outbreak in Hispania, relaxed its physical standards, especially for those with excellent magic. She was then able to become a long-cherished air witch. However, recruitment standards for officer training schools were not relaxed, so she was accepted as a regular witch.

After a test and brief training, she was appointed sergeant and sent to Hispania to be assigned to the 88th Fighter Squadron. Her small body and lack of strength could not be covered by training and effort alone, and she could not follow other witch dogfight tactics.

To overcome this, she developed an effective and possible strategy for her. Studying the enemies patiently from a certain distance, observing their movements and flight characteristics, suddenly approaching from a blind spot and hitting a critical point, then quickly leaving. With less fatigue and less wasted ammunition than with dogfights, this tactic was noticed by Wing Commander Mölders at the time of seeking new tactics, and she created the Rotte tactics. This consist of a team of two witches, one attacking and one supporting from above. Research on Rotte tactics with Wing Commander Mölders was rapidly refined, especially as it was a suitable attack method for the latest unit, the Bf 109.

After the Hispanian campaign, she was promoted to Warrant Officer and transferred to JG52. She was appointed as an educator to communicate her new tactics to other witches and improve general skills. After the invasion of Neuroi in her home country, her number of shot down increased while training and educating new witches in actual combat. It was at that time that she first met then Pilot Officer Erica Hartmann during her dismal wartime debut. Her teaching skill, thanks to a talent for deftly influencing people meant much of the efforts of instructing new pilots was left up to her, and Erica learned most of the basics of dog fighting under her tutelage. She became the captain of Hartmann, and the two had been pairing for a while.

She's brought up a large number of new pilots, drilling them that the one thing a dog fighting ace should rely on was not unpolished nerve or some innate "genius" sense, but rather a reliable combat methodology. A large number of them became important aces later. She acknowledges that her abilities are limited, so she looks forward to the students she reared herself eventually surpassing her own kill count.

She constantly works to defend the new pilots in their unit from Flight Lieutenant Krupinski, saying "...and after what you did to that cutie Hartmann?". However, it's generally said that this was just bit of half-joking between trusted comrades-in-arms.

She later participated in Operation Barbarossa and became a member of the 502nd Joint Fighter Wing formed in Petersburg, where she is mostly referred as "teacher". She taught Karibuchi Hikari how to use her magic properly. The level of her magical control and technical magical acumen is high enough that Edytha can use her magic shield to walk across water as if she were walking across the land; far beyond merely using her shield as a mere, momentary stepping stone like the Karibuchi siblings can. Additionally, she's capable of teaching the principles and technical aspects required to achieve the magical control to accomplish this feat as well as teaching a witch how to use their shield as a hand hold of sorts to climb smooth 90 degree angles without natural handholds.

A serious senior commander on the battlefield, but otherwise a girl with a cheerful sort of "face forward" personality. Her fighting style is the very essence of cleverness. Because her body can't handle the high-speed maneuvers of dog fighting for an extended period of time it was necessary for her to learn a style that married careful observation of the target to a single decisive blow and follow-through escape.

Edytha has a fondness for caviar and often stockpiles a large supply of caviar in the base's food stores. She becomes short tempered if it is wasted fecklessly. It is not unusual for her to spend the whole holiday to secure the ingredients.

Edytha switched from the MG 42 to the Fliegerhammer because her magic power is entering a period of decline and the 502nd is full of close combat witches. This allows a way of fighting prioritizing support from a more remote position.

"What kind of trouble am I going to have to break up today... Hey! You Fake Countess, what do you think you're doing forcing alcohol on that recruit!" 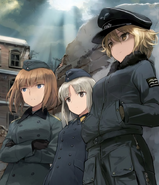 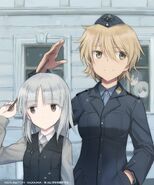 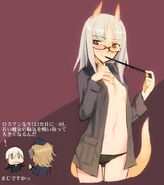 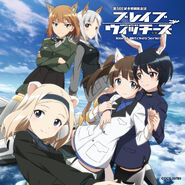 Add a photo to this gallery
Retrieved from "https://worldwitches.fandom.com/wiki/Edytha_Ro%C3%9Fmann?oldid=23573"
Community content is available under CC-BY-SA unless otherwise noted.