In the past she was once a rival with another witch and the two girls often competed against each other to see who was the better soldier. One day, due to Beurling's recklessness in battle, her squad mates desperately attempted to protect her; this resulted in Elizabeth's rival taking fatal wounds and eventually succumbing to them, dropping out of the sky beside Beurling, her breathing having already long ceased. This incident pushed Beurling into depression to the point of acting out, acting insubordinate by disregarding protocol, and even when confronted by Anabuki Tomoko at sword point she even tried to goad the Fuso witch into killing her. The guilt of the loss of her squadmate because of her actions ran deeply for Beurling, making her a very distant person from her squadmates, with she and Tomoko frequently clashing as a result. Since that fateful day Elizabeth still equips her fallen rival's Hurricane Mk II Striker Unit. She is also a colleague of Wilma Bishop in the novel series Strike Witches: Suomus Misfits Squadron.

During the outbreak of the Second Neuroi War, Beurling was part of the Ostmark International Neuroi Watch Wing and fought alongside Hanna U. Rudel.

Originally a part of the Britannian witches, P.O in the 403rd, Beurling chose to be transferred to Suomus instead of being forced to be promoted to Flying Officer, this decision stemming from her guilt resulting in a self destructive desire to die. Elizabeth is the number 1 trouble-making insubordinate member of the Britannian Air Force. Considered to be a loose cannon compared to everyone else, Elizabeth was to be executed for her constant insubordination and nature by the Britannian military brass. Despite her bad habits and often uncooperative attitude, she is originally the only witch that Tomoko considers capable in the unit. What's more, due to her perceptive nature, she revealed Giuseppina Cenni was possessed by the Neuroi since entering the squadron.

And as difficult and stoic as she may seem and as much pain as there may be in her heart, there still lies a good person in her: when a village was attacked by the Neuroi and she saw the destruction of the local orphanage with the orphans crying at losing the only place they could call home, Elizabeth was noticeably wracked with emotion in her voice that was uncharacteristic of her. Also when Tomoko was still caught up in her own troubles and her attempts at trying to focus on her own kill count and having no faith in the abilities of her wingmates, Elizabeth confronted Tomoko and confided her history to the Flash of the Fuso sea, including the tragedy that haunts her, then using the tactical reasoning and perception of past battles, explaining to the Fuso Ace that the enemy they are to face isn't what they expect. Another example was when Tomoko was being attacked by a Diomedia that she attempted to fight alone only to get overwhelmed; Elizabeth threw herself in front of the incoming fire of the massive Neuroi to shield Tomoko and save her life, despite the fact both of them constantly clashed with each other prior to this.

Elizabeth is the "bad girl" of the Suomus Misfits; she is cold and often distant in demeanour, feeling no need to engage in niceties and openly resentful of authority or bureaucracy. Furthermore, she is a chain smoker and likely an alcoholic. Under this exterior, however, is a girl who is fond and even protective of her squadmates. She is considered to have a rather gloomy personality with a slightly suicidal streak and often has a bit of a depressed side to her but shows supports for Tomoko Anabuki on her decisions in spite of her insubordinate personality. She is a maverick herself, taking little heed to the brass and disobeying them at almost every turn (from simple things like smoking and going to the pub late at night to more complex things like refusing to use the new striker units), she is rather skilled in combat and has no ranged weapons instead just uses her kukri and cuts up enemy soldiers. She does have a rather gloomy personality.

Her relationship with Elma Leivonen and Anabuki Tomoko, in particular, are portrayed as close, if tumultuous. She also has a close relationship with Hanna Rudel and Wilma Bishop who were both drinking buddies.

At the beginning of the novel series, Elizabeth is avidly against changing her Striker Unit, the Hurricane Mk.II, because it is the antique striker of her rival. However, later in the series (from volume 3), she changes to the Spitfire Mk.V.

If she is using a machine gun or a pistol in battle is unknown, although it appears in recent media the Bren Mk 1 is one of her regular primary weapons. According to a picture, Elizabeth uses a Gurkha knife (a kukri knife) and a Brownie Mk. 1 (a Browning Mk. 1 9mm pistol). 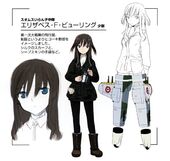