Erwin Rommel is one of the highest tanking officers of the Karlsland military, with the rank of Field Marshal. In the series, he is in command of Karlsland's Afrika Korps in Africa.

So-called "The Desert Fox", he is one of the best Karlsland officers, known because of his unorthodox strategies and use of tanks. He is also well known for specializing in Blitzkrieg tactics against the Neuroi, which were highly effective during the defense of Karlsland.

In the early stage of the war, Rommel who fought hard during Operation Dynamo, in which humanity retreated from the coast of Gallia at Dunkirk, had high praise for the land battle witches of the Britannian Expeditionary Force and their Matilda II. Later on, Britannian land battle witches equipped with Matilda II units aided Rommel numerous times in the North African front. In the early stage of the Karlsland Afrikacorps campaign when Karlsland witches equipment was relatively feeble, Rommel would frequently visit land battle witches of the Royal Tank Regiments, leading to rumors of the married Romel's infidelity and whispers about him finding a Britannian girlfriend. There are records that claim that these distractions reached a point where he had to personally address the issue and explain himself to his wife.

In "Operation Victory Arrow Episode 2", he commands a naval task force in order to eliminate the Neuroi (designated an OX-2 Neuroi) hiding inside an island in the Aegean sea. At first, he intended to bombard the island to nothing, to destroy the Neuroi in the process, however he later decided to change his plans due to Charlotte Yeager's last moment plan to use a winch to drag the Neuroi out, thereby saving the island from destruction. This was because the island was home to ruins that Lucchinni wanted to protect.

Edytha Neumann appears to be his aide and guard.

He also has a collection of Witch photographs.

Other than that, he is also one of the three commanding officers in Africa, known to be in competition with two other military legends, General Patton and Montgomery.

He has always insisted on serving beside his soldiers in battle; and his charismatic personality and inspiring presence make him highly beloved by the soldiers of all armies, including the witches. It's this charismatic presence and way of inspiring his forces alone that can help turn despairing troops on the verge of breaking before an overwhelming Neuroi offensive, and restore their breaking moral in an instant with enough courage to charge the attacking enemy and hold the line fiercely; rallying them even despite such grim odds.

Rommel has also written books (presumably on infantry and armor tactics and warfare, like his real life counterparts written works) that were read by both Patton and Montgomery.

Rommel and his personal detail retreating from a perusing Neuroi in his Karlsland SdKfz. 250/3 command vehicle

Rommel overseeing the deployment of his forces during Operation Sphinx

Rommel immobilized by the Sphinx. A Karslalnd Mechanized Armored Infantry Witch is seen behind him also immobilized. 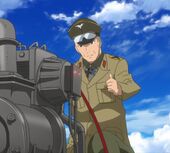 Add a photo to this gallery
Retrieved from "https://worldwitches.fandom.com/wiki/Erwin_Rommel?oldid=30405"
Community content is available under CC-BY-SA unless otherwise noted.