A Former ground attack strike witch that was fighting in Karlsland at the beginning of the war. She nearly loosed all of her magical power after being wounded during the withdrawal battle of Karlsland. Despite this, she was dispatched to North Africa where she commands a Karlsland Division with an experimental Tiger land striker unit attached. Her lover named Hauptmann Michael Schmitt is a former Panzer commander and serves under her in the same division. He is also her reason why she keeps fighting against the Neuroi.

Despite her age and degrade in magical ability, by the time of 1942 Friederike could still muster enough magical ability to fight if need be: operate MG-34 in akimbo with limited barrier ability (Tiger in Desert 1); operate a Stuka Strike unit with 37mm cannon (Witches of the Sphinx 3) and again, MG-34 in akimbo (The Witches Of The Sphinx 4).

Though by regulation romance between a common soldier (no matter he is rank & file / NCO / officer) and a witch is usually not allowed, the story of Friederike and Schmitt's was one that, according to Marseille at the end of Tiger in Desert 2, was pretty well known - and envied - amongst Karlsland witches.

Friederike in her youth, flying past Michael and his tank in her Ju87 Stuka Striker 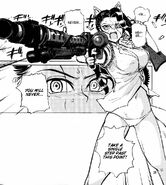 Frederica interacting with locals, photo taken in 1943 by Katou keiko
Add a photo to this gallery
Retrieved from "https://worldwitches.fandom.com/wiki/Friederike_Porsche?oldid=25786"
Community content is available under CC-BY-SA unless otherwise noted.