Born in Kaisersberg, located near Libau, Gertrud volunteered to the military even before the Neuroi invasion and was assigned to the Jagdgeschwader 2 (JG2) as a regular officer after leaving the military academy. Soon after, she was transferred to the Jagdgeschwader 52 (JG52), piling up promotions along the way. She had a cat-and-dog relationship with (at the time) Pilot Officer Marseille, her subordinate back then. Marseille not only treated Gertrud like someone of lower rank, but also ridiculed her as a "hard-headed siscon". When her little sister Christiane (Chris) was in a comatose state after being injured in the evacuation war, Gertrud's behavior was conspicuously taken by self-abandonment. However, she gradually improved from her contact with Sergeant Miyafuji. With Chris' convalescence and later awakening, she began to gallantly go visit her and send souvenirs from her place of deployment. It seems that Gertrud herself thought that she "had been trying to not show it in front of people", which greatly surprised Flying Officer Juutilainen.

At one point, she, Wiese, Hartmann and Krupinski had an audience with the Emperor of Karlsland. If Johanna hadn't been there, a hole would have opened in Barkhorn's stomach due to stress during that small trip. It was also around that time that she deepened her friendship with Minna-Dietlinde Wilcke and Hartmann. At the time, Nakajima Nishiki fought together with both Barkhorn and Hartmann... but pitifully, she was completely forgotten by the two.

Seeing how Angela Salas Larrazabal has a history in the División Azul, she might have met Hartmann and Barkhorn, two of the best Karlslander aces, during the evacuation of Karlsland.

During the Gallia evacuation war, Gertrud became the commander of the JG52 Gruppe II. However, the other members of the flying corps were scattered in the middle of the evacuation war, with only her and Flying Officer Hartmann remaining in the end. Afterwards, with the establishment of the 501st JFW, she joined in along with Wing Commander Wilcke and Flying Officer Hartmann in June of 1941, becoming one of its founding members.

After the liberation of Gallia and the disbanding of the 501st JFW, Gertrud moved to Sint-Truiden (St. Trond), Belgica, along with Wing Commander Wilcke and Flying Officer Hartmann, engaging in Karlsland recapture operations.

She was the third person from Karlsland to achieve a shot-down record of 250 units, being awarded with a Knight's Cross with Oak Leaves and Swords (Ritterkreuz des Eisernen Kreuzes mit Eichenlaub und Schwertern). Within the Strike Witches' universe, she is one of the best-seven witches in terms of shot down count (the other six being Wilcke, Erica Hartmann, Heidemarie W. Schnaufer, Gundula Rall, Hanna-Justina Marseille and Hanna U. Rudel).

Ever since the 501st JFW was reformed in Romagna, Gertrud once performed a test flight on a Me 262 V1 - a new Jet Striker developed in Neue Karlsland. However, a defect in the machine caused her to suffer from heavy magic power consumption and made her crash.

She has something of a principle to not put anything in her room that can be described as quite extreme and, in a sense, tasteless. When she shared a room with Flying Officer Hartmann, a red boundary line was drawn in the center of the room as a method to not permit the trespassing of objects (junk). A fence was set on that boundary line, which Gertrud herself calls the Siegfried Line.

A calm, cool and collected realist, Gertrud always tries to conduct herself in a rational manner. But since deep down she is a hot-blooded person, there are also times when her emotions get too worked up and she loses sight of her surroundings. She believes that a military member should abide by discipline and rules, but still doesn't seem to try to impose that much on anyone other than Flying Officer Hartmann.

She has a tendency to be too hard on herself as well as on others. Also, she always complains when someone is late and just loves rules and regulations. She's the kind of person who never lets her guard down. However to her friends Minna and Erica, whom she has known for a long time, she's slightly more open and friendly although she often yells at Erica for lacking discipline.

Gertrud has a serious siscon side, with a weakness for not only "little sisters" but also "little sister-like characters". The targets of her affections are those who resemble her own little sister, Chris, in looks (like Sergeant Miyafuji) and those who she concludes that were "certainly raised by a gentle elder sister" (like Flying Officer Litvyak). Those like Pilot Officer Lucchini or Flying Officer Juutilainen are excluded.

Gertrud's cooking specialty is the Eisbein. She usually is not particular about taste, but that changes when she is cooking for her little sister. Also, she is bad at handling complex machines, with her driving skill being especially dangerous. Out of prudence, she often has Flying Officer Hartmann take the wheels when going out.

Gertrud's inherent magic is called Superhuman Strength 〈Super Physical Strengthening〉 (怪力 〈超身体強化>, Kairiki <Chō-shintai Kyōka〉) Classified in telekinesis-lineage, it far exceeds the Body Strengthening (肉体強化, Nikutai Kyōka) - one of the basic abilities of a Witch - in capacity and sustainability. This kind of ability circulates the magic power inside the body and expenditure is low since there is no external diffusion, making it possible to employ it for long periods of time. Because of that, Gertrud can hold heavy armaments that normal Witches cannot and, from the fact she can carry even more ammunition than others, this can be described as an ability suited for drawn-out combats. It also allows her to tear off iron chains and lift up steel frames of a few tons for a short time.

Gertrud can perform for a long time in combat with heavy armaments thanks to the special qualities of her inherent magic and is a capable flying corps' combat leader. Still, she is also skilled in drafting operation plans, arranging of equipment and human resources and desk work about things such as management of supplies, making her a good fighter wing's adjunct. Within the 501st Joint Fighter Wing, she is the archivist in charge.

Using new units is easy, so it is not uncommon for her to rush into testing new machines without training.

Gertrud's Fw 109D-6 is a prototype model that exchanged the FW 190's standard air-cooled engine to a liquid-cooled one. This liquid-cooled engine variation of the Fw 190 would later be adopted as the Fw 190D-9. Also, as a peculiarity, her Fw 109D-6 has something like a radiator attached to its lower parts. Around the time the Fw 109D-6 was still undergoing testing, she also had a Bf 109G-6 prepared as a spare unit.

Gertrud once performed a practical test on a Me 262 V1 - a new model of Jet Striker developed in Neue Karlsland. However, a defect in the machine caused her to suffer from heavy magic power consumption and made her crash.

In regards to her weaponry, Gertrud's MG151/20 can fire a high-powered Minengeschoß. However, since this is a very unique shell, the supplies didn't make it in time and she is never seen using it on the Anime. The MK108 and the BK-5 were exclusively used when she was testing the Jet Striker.

Trude's Comments On Other Characters

"Minna... come to think about it, we've known each other for quite some time now. She was there for me when Karlsland fell and I wasn't able to protect Chris... That's another reason why I have to help her out as much as I can."

"Sergeant Lynette... Somehow, she feels quite similar to Minna. She's progressed a lot since she scored her first aerial victory. She's strong-willed and has a good sense of grasping the whole picture, so she looks promising as a future commander. But well... first we have to teach her about strategy and tactics."

"Miyafuji? Hm, well, she looks a lot like Chris. No! I mean, Chris is more beautiful! But... How should I put it, the atmosphere around her is quite similar. It's like I got another little sister or something... Yeah, that doesn't sound too bad. I've promised her to let her meet Chris sometimes, I just hope they will get along."

"The Major? Yes, she's way more fit as a commander than I am. She has the ability to make good decisions on the spot, gives very clear instructions, and everything she does is based on experience. She also has courage and seems to fear nothing – she's great. I also greatly respect how she never boasts about her war merits."

"Perrine? I feel bad for the trouble I've caused her. Although I was at fault for not being able to fulfill my duties as a leader in that battle where I was wounded, she was the one who came up to me when we had returned to the base and asked for forgiveness. I'm not sure how to react when someone comes up to me and asks for forgiveness that sincerely. I thought she only acted like that in front of Major Sakamoto."

"Pilot officer Lucchini? Really, I never have any idea of what she's thinking. Well, she's only a child so I guess there's not much to do about it, but... Her way of doing as she pleases all the time can really get on my nerves. However, her marksmanship is great, and she's a genius when it comes to dogfighting. Well, Minna's plan to let her progress at her own speed might be right."

"That Liberian is just like Lucchini; she's doing things as she pleases way too much. She got promoted to being a Flight lieutenant like me, so she better start taking responsibility as a senior of the group and keep everything going when Minna or Major Sakamoto are absent. Well, she never gets stressed up about small matters, that's good, but I'm still a bit worried."

"Frau... She hasn't gone through the sort of rigorous training on the front me and Minna have, but she's one of those amazing ones who suddenly just started to show us how talented she is. Without a doubt, she's the most skilled witch in the unit. Well, but her time as a trainee was apparently a real mess, Roßmann who was her leader back then laughed when she told me about it. However, she might not look like it, but she can be very stubborn sometimes, and she always looks at everything with critical eyes, so she isn't liked by the people above. That's why I have to protect her."

"There aren't many experts at night battle, so it's really a welcomed talent. I don't really like flying in the middle of the dark night myself. I've been a little worried about her as a witch since she's so reserved, but it seems like she's had something of a breakthrough lately."

"Eila... I can never tell if she's serious or if she's joking, but she's someone you can rely on in battle. I can trust her guarding me in front or in the back, she can work as a leader or a consort. She's a true all-around player. It seems like she's often assigned to supporting Sanya lately, I wonder if she's trying to become a night witch or something."

Wing Commander Barkhorn's intentions were to stay on the frontlines until every single Neuroi was driven out, but when Flight Lieutenant Hartmann said "If I'll do it properly, do you think you can be at peace?" she decided to step down to live happily with her little sister. 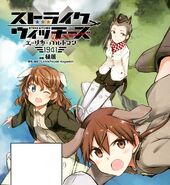 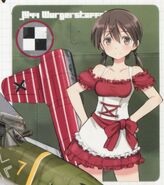 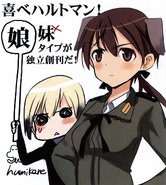 Retrieved from "https://worldwitches.fandom.com/wiki/Gertrud_Barkhorn?oldid=26646"
Community content is available under CC-BY-SA unless otherwise noted.