Giuseppina Cenni (ジュゼッピーナ・チュインニ) is a Witch of the 507th Joint Fighter Wing, originating from Romagna.

An ace witch of the Romagnan Air Force, she first gained experience in the Hispanian campaign of 1936. Even in 1936, she was a talented Witch with high abilities. She was transferred from the Mediterranean battlefields to Karlsland. She led a dive bomb squadron from the Mediterranean to the Karlsland border where she developing the technique of "skip bombing". This tactic successfully destroyed the coastal fortification-type Neuroi.

Giuseppina went missing in action after she was shot down over Neuroi territory. Afterwards, she was able to return home on foot, but lost both her memories and splendid flight skills. The Neuroi captured her and brainwashed her before sending her back. She was sent to Suomus to serve with the Suomus Independent Volunteer Air Squadron to give her some time for rehabilitation, but it is there that the destiny in store for her unfolds. Originally a brilliant ace, she's mostly emotionless and confused, with no memory after her accident, but she seems to learn almost too quickly once in Suomus.

Sakomizu Haruka didn't get along with her due to her supposed affiliation with Anabuki Tomoko despite her memory loss prior to entering the squadron causes competition between the two, leading to a battle to decide who finally wins Tomoko once and for all. Eventually, the squadron finds out that the Neuroi have been using Giuseppina to learn and copy human tactics, sending them back to the Neuroi in order for them to train up pseudo-witch copies of the Suomus squadron.

Nicknamed "Pasta Officer" by Sakomizu Haruka after she regained her memories.

She was emotionless and confused while she lost her memory. But she is actually a very energetic and happy girl with a seductive side. 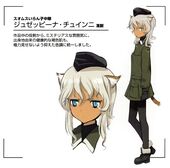