Grace Maitland Steward (グレイス・メイトランド・スチュワード) is a witch of the Music Squadron‎, originating from Liberion. Her nickname is Gracie.

During her active service as a witch, she participated in many battles, including Dunkirk's retreat and the Battle of Britain, as a part of the Liberion Volunteer Army.

After she retired as a witch, she started working on unfamiliar desk work, but based on the belief that songs will save people, she set up a concept of "aerial magic band" that gathers witches who cannot participate in battles for various reasons. She rushed to get budget and recruit witches. 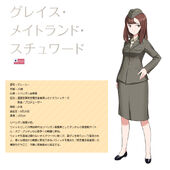