Hanna-Justina Wallia Rosalind Sieglinde Marseille (ハンナ・ユスティーナ・ヴァーリア・ロザリンド・ジークリンデ・マルセイユ) is a Witch of the 31st Joint Fighter Squadron Africa, originating from Karlsland. She is affiliated with the Karlsland Air Force and her home unit: the Luftwaffe's JG27, in Africa. An ultra-ace with the highest shot-down records in the North African front called "Star of Africa" (アフリカの星, afurika no hoshi) out of her prodigious air combat skills and sparkling beauty. Some also know her as "Desert Eagle" (砂漠の鷲, sabaku no washi) and - after her machine's call sign - "Gelb Vierzehn" (ゲルベフィアツェーン, gerubefiasheen), but those close to her simply call her Tina (ティナ).

Her familiar is the Steller's Sea Eagle. In October 1942, her first familiar died in middle of combat. In order to mourn its death as a comrade in arms, she raised a gravestone in form of a pyramid right beneath the combat airspace.

Marseille was born in the Karlsland capital, Berlin. She has a Gallian surname, for her ancestors immigrated from Gallia because of the Karlsland industrial promotion measures. Coming from a military family, with a Witch for a mother and a soldier for a father, she decided to become a flying Witch out of admiration for the ace of the previous war - Richthofen.

As her magic power manifested since early, Marseille herself was eager to matriculate into a training school. However, in part due to her family's disagreement and a lack of understanding from those around her, she wasn't quite able to obtain the matriculation eligibility. From this, she became lost about what to do with her power and just kept causing trouble. But upon accidentally meeting a noble in Berlin who took a liking of her, Marseille got a recommendation and was able to matriculate.

In spite of her excellent grades, her time as a trainee was all about being lazy and pulling on pranks. Marseille was particularly attached to Erica Hartmann, who had transferred from a training school in Bayern - with their relationship being a repetition of one-sided challenges and light turn downs. With her being regarded as "impertinent and rebellious" by the instructors, the top student position of the training school ended up being taken away by Hartmann. Even after graduation, a portion of the faculty didn't approve Marseille's commission. However, thanks to the unyielding insistence of her supervising instructor, who held her talent dear, and even the advice of a close aide of Emperor Frederick IV, she was safely appointed as a Pilot Officer.

Later, Marseille was assigned to the Jagdgeschwader 52 (JG52) 4th Staffel together with (at the time) Pilot Officer Hartmann. In her first battle, she brought the Neuroi into a dogfight and got her first shot-down. Afterwards as well, she successively got shot-downs and was awarded with a Eisernes Kreuz 2. Klasse, followed by a Eisernes Kreuz 1. Klasse.

However, Marseille went too far in ignoring orders for the sake of earning shot-down counts. So, due repeatedly doing things like abandoning the escort duties of her lead plane to charge in solo, she was punished with three days of confinement for violation of orders, disregard for military regulations and destruction of Striker Unit. With her unprecedented life-style, Marseille was becoming a problem even within the military and even her superior officer back then, (at the time) Flying Officer Barkhorn, also evaluated her as a "subordinate that cannot be trusted". She had a cat-and-dog relationship with her. Marseille not only treated Gertrud like someone of lower rank, but also ridiculed her as a "hard-headed siscon".

Eventually, she was transferred to the Jagdgeschwader 27 (JG27) Gruppe I without ever being able to fit in her previous unit. The commanding officer of (at the time) Marseille was assigned to the unit was Edytha Neumann. Edytha didn't had a favorable impression on the girl, but promised to turn her into a first-class Witch anyway. Her situation then changed for the better due to the JG27 being mobilized to Africa. In a place with so few pleasures like Africa, Marseille's bright and cheerful personality and boasting tendencies were well accepted. She herself was delighted with that, resulting in her learning to be cooperative with those around in middle of that harsh environment. Later on, she also mysteriously managed to become more composed, even aloof. Since then, there has been a drastic decrease in the number of members of the unit and, for a time, it was just Raisa Pöttgen and Marseille.

Upon awakening to tactics and perfecting her wonderful predictive shooting, Marseille's shot-down count rapidly increased. Eyesight to detect a Neuroi beyond a cloud of sand faster than anyone else; sharp and accurate acrobatic maneuvers; discernment and accurate marksmanship to grasp the position of herself and others in a three-dimensional space and send in bullets after predicting their future positions. When all these abilities got together, it was almost like the Neuroi hit the bullets by themselves. The fact that she changed from a Bf109E model to a Bf109F model, which was improved for maximum speed and close-combat performance, also became a main factor behind the increase in her shot-down records.

The Neuroi that appear in the African district, despite smaller in numbers, are comparatively of a type of formidable enemy that require a greater level of caution than those in Europe. Thus, some say that Marseille's score is worth 2 to 3 times more. From that exceptional shot-down records, her name resounded all over the world in a heartbeat. The media wrote her up as the "Desert Eagle" and the "Star of Africa" and, coupled with her natural beauty, turned her into a great hero of Karlsland.

Afterwards she was promoted to Flying Officer and transferred to the foremost frontline in Tobruk, simultaneously being appointed as the company commander of the JG27 3rd Staffel.

When Adriana Visconti was demoted to Tobruk, Marseille was there also, but she was transferred somewhere other than her home unit before Adriana arrived, so they never met each other. During that time many jokes were going around about whether these two had liked or hated each other if they had met.

She later becomes one of the founding members of the 31st Joint Fighter Squadron Africa, and actively participated in humanity's North African campaign against the Neuroi invasion.

Within the setting of the Strike Witches' world, she is one of the best-seven witches in terms of shot down count (the other six being Wilcke , Barkhorn , Schnaufer , Rall ,  Hartmann and Rudel). Currently in 1945, she is one of the world-famous Witches. But despite having many civilian fans, Marseille has a principle of not giving out autographs.

Impertinent and rebellious, Marseille has a bright and cheerful personality and boasting tendencies. Later on, she also mysteriously managed to become more composed, even aloof. She loves milk and keeps a cow in her unit. She is also a smoker and especially likes waterpipes. A genius who possesses great confidence in herself, she has an arrogant character and a competitive behavior. She regards Erica Hartmann from the 501st JFW as her one and only rival.

Raisa Pöttgen harbors feelings towards Marseille that are close to worship, and while she acknowledges being her support-role, Raisa puts a certain distance between them in their private lives.

Marseille has an inherent magic called Deflection Shooting (偏差射撃, hensa shageki). However, it greatly differs from the normal Deflection Shooting, as some say that it appears as if, while both parties are in the middle of performing complex maneuvers, she sends in bullets at places where there isn't anything and the enemy just comes into her line of fire on its own. There is a possibility that it is a combination of three different magics - future sight, Three Dimensional Space Understanding and Magic Bullet - but there are no definite conclusions.

Especially in regards to marksmanship, Marseille is evaluated as mankind's greatest Witch. It was said that it even looks like "the target flies into her line of fire on its own accord".

Marseille's Bf109F-4/trop DB601 engine is tuned up. High-grade components were chosen for the engine and the induction pressure was jacked up. While that meant the life of the engine will be shortened somewhat, its power was increased by 10%.[1]

In October 1942, Marseille received a Bf109G-0 prototype Striker Unit for evaluation. The unit has the more powerful DB605 engine and strengthened frame, however the cooling system remains the same. Sortieing with it right away due to her Bf109F-4/trop being serviced, she suffered from engine overheat. Marseille was unable to regulate the output of the magic engine due to a failure, causing it to blow on fire. Katou Keiko tried to rescue her, but she had to max out the power output of the engine for a long time, and when she finally reaches Marseille, her own engine blow up. At this moment, Marseille's familiar uses its last strengths to save them from the freefall, and die of exhaustion. A bit after, another eagle, the son of Marseille dead familiar, comes down from the sky and makes a contract with Marseille. Because of that Marseille hesitated to use the Bf109G-2/trop model, but changed her mind due to the persuasion of those around and the careful checks of the maintenance crew.

Her Bf109G-2 is based on the G-2 desert type, but high precision parts were selected for her unit and its fuselage and magic engine were thoroughly lightened. From an outside view its appearance is identical to the normal model.

She received a yellow-colored M1934 - named the Marseille Special - from the Baretta Company.

Marseille, age 8, summer. She still doesn't know why she has the strong powers she has, and what she should achieve with them.

Replica of Marseille's Striker Stabilizer with the one-hundred victories mark

The Witches of Andorra art

Witches of the Sphinx art 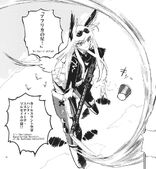