Rudel is a Karlslander anti-ground witch. She is considered the best ground attack witch in the world.

During the outbreak of the Second Neuroi War, Rudel was part of the Ostmark International Neuroi Watch Wing and fought alongside Elizabeth F. Beurling.

After 1940, she was promoted to colonel and commander of the Second Dive Bombing Wing.

Within the setting of the Strike Witches world, she is one of the best-seven witches in terms of shot down count (the other six being Wilcke, Barkhorn, Schnaufer, Rall, Marseille and Hartmann). Her Adjutant is Adelheid.

She and her Stuka Squadron were dispatched to Mikkeli Base in Suomus to aid the Suomus Independent Volunteer Squadron reclaim the fallen town of Slussen from the Neuroi in 1939. There, she discovered that using high-caliber guns instead of traditional bombs is far more effective for anti-ground missions, which became a standard tactic of anti-ground witches later in the war. Rudel and her Stuka Squadron carried a 125 kg bomb in the first bombing mission on Slussen for dive bombing. However, it was not very effective. Therefore, they turned for a larger firepower. In the final assault of Slussen, they used a 37mm anti-tank gun.

Her Fw190 unit had a temporary painting, and it is highly likely that the surplus new model was used temporarily.

Hanna Rudel is a highly driven, focused and confident witch, fearless and undaunted with her missions and mostly unconcerned for her well-being in battle; making relentless assaults and attacks against the enemy and accomplishing very awe inspiring, yet highly risky, feats. Such methods (which some would argue are outright reckless) had resulted in her inflicting regular injury to herself to the point where she caries considerable scars on her body, with the scar along the bridge of her nose being the most noticeable and prominent. Noticeably she still insists on flying however, despite any injuries she sustains and even if ordered not to fly until she heals up her wounds and rest. It was due to her reckless achievements and driven focus that she earned the name "Beelzebub" and "demon" due to her actions, attitude and accomplishments under fire and having the uncanny ability to avoid death. Even despite being old enough that she cannot raise a shield anymore; she still flies and fights regardless and keeps this detail a secret between herself and Adelheid.

There are times where she is insightful and stoic, and times where she is apathetic to her own personal upkeep and appearance and what others think of her, whether good or ill. But the striking thing about Rudel is Rudel has an attitude that can be argued to be in the realm of being "a fanatic" with an obsession for fighting. She is staunchly anti-Neuroi and believes that the only way to secure humanities survival is the complete eradication of all Neuroi, one alien at a time, and that her place as a witch is on the battlefield and that no one and nothing can or should stand between her and her duty and place as a witch and soldier of humanity.

It's due to this fanatic, obsessive drive as a witch that Hanna was noted to have problems in terms of her behavior towards others: one prominent and telling instance was when she earned a medal from the Karlsland emperor himself. Upon being presented the knights cross with gold oak leaves, swords and diamonds for her accomplishments and being offered a chance to retire from flying and command from the rear Rudel promptly and sternly refused and stated that so long it is sworn that she never be asked to do desk work ever again: "She would gladly accept this medal"; much to Marshall Hermann Göring's shock and horror and the Kaiser's uneasy bemusement. As such, Hanna has been known in some circles to have a very terrifying presence and carries a reputation of being a fearless witch who loves to fight.

However she also has a contrasting reputation to those close to her and witches she served with of being a witch of not only talent but of a great caretaker and dutiful, protective, loyal comrade to her fellow witches. She is a fair, competent, insightful leader to those under her command, often providing guidance and hope to her comrades in her own way. In past battles many witches that serve with her and under her were faced with many dangerous battles, and some witches were even felled in combat: but Rudel never abandoned her fellow witches or left them until the battle was over, and saved the lives of her subordinates numerous times; earning the respect, admiration and adoration of witches she served alongside and led in battle. She also places a great deal of trust in her second in command and Adjutant; Adelheid and looks to her for support.

So strong is her desire, if not obsession, to fight and serve mankind and, most of all to save the world, that when the doctor told her that her leg was broken and tried to stop her for trying to sortie she replied that the best place her leg belongs is in her striker unit. And when she was faced with an injury so severe she couldn't walk and was bedridden she was tearful and inconsolable, expressing her desire to sortie, to fight alongside her fellow witches and to fight the Neuroi, cursing her injury and calling for Adelheid.

While focused and dutiful in her duties and military affairs, it seems non-military affairs and tangential meetings tend to occasionally slip her memory due to her tunnel vision though Adelheid helps to remind her, and Hanna does her best hold herself to her promises even if she occasionally forgets making them at times.

She likes drinking freshly squeezed milk and tends to get agitated when she doesn't get freshly squeezed milk. She also doesn't give much care to whether she is seen naked or not. Her mindset is that "the power of a witch is the will to fight", and that a witch's job is to do the impossible; which could serve to show why she has a desire to fight that can be said to be fanatical and obsessive. While she usually has a low opinion of most reporters as she views them as tending to write rumors and fabrications (including of Rudel herself) as well as "robbing valuable sortie time": she had grown impressed with the honest, earnest conviction and ideals of witch reporter Niermann and her spirited personality.

Despite her reckless, fanatic and obsessive nature and desire to fight: she has no desire or intention of dying and refused to allow herself to die, thinking throwing one's life away is stupid and that if she did die: she wouldn't be able to kill Neuroi and the save the whole damn world.

She also has a friend from Fuso whom she is known to quote the wisdom of. She and Adelheid also tend to behave towards each other like something of a married couple.

In Fumikane's "What If - 1947" tweets, he mentions that after the war, Rudel befriends Perrine H. Clostermann while they are both helping to rebuild a herb garden, and Rudel is made an honorary director of the school and orphanage that Perrine founded. 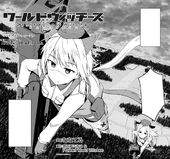