Hanna Hertta Wind (ハンナ・ヘルッタ・ウィンド) is a veteran witch of the Suomus Air Force's 24th Squadron, and the second highest-scoring Suomus ace after Eila Ilmatar Juutilainen. Nicknamed “White 7” after the markings on her striker units, she was given the nickname "North Pole Marseille" (in reference to famed Karlsland ace Hanna-Justina Marseille) after a particularly successful set of sorties. Her Suomus friends often call her just "Hasse", similar to her ace archetype.

The number two super ace of the Suomus Air Force. Number one is Flying Officer Juutilainen of the 501st JFW. She's someone the new recruits always can rely on. She's a good leader, but she's not the kind of person who tries to force her subordinates to work, but rather someone who smilingly watches over them with a broad mind.

At the time of the beginning of the Neuroi invasion, she had no chance to sortie as a reserve officer, so she entered a military academy and received education as a regular aviation witch. After being assigned to the 24th Squadron as a Flying Officer, she was given the then state-of-the-art Beerster Buffalo to combat Neuroi. She gained experience and grew from a newly recruited witch to a dependable mid-career Officer, serving as the company commander.

She's an all-round fighter who has no weakness that seems to be a weak point, and has high capabilities in all aspects of air combat maneuvers, shooting, magical power, commanding ability, and enemy intelligence. She excels at shooting in particular and can use any kind of firearm skillfully, from pistols to anti-tank rifles. She is a valuable witch in Suomus, where equipment is normally in short supply, because she is trained to use all units and weapons freely. When compared to Eila, she is often referred to as "Hanna the Marksman" and "Eila the Evasive", although in Hanna's case her talents are more broad-reaching.

Due to her skills, she has been asked to join both the 502nd and the 503rd, but since the recruits are so attached to her, and due to her own reasons, she has declined and stays in Suomus.

Hanna's close friendship with Nikka Edvardine Katajainen was solidified in an incident where a group of Neuroi one day approached Suomus airspace, and a large scale battle involving around ten witches followed. In that battle, Hanna was shot down and wounded as a result of Nikka's mistake. While the new recruits despaired at the sight of a top ace being shot down, and the situation seemed to be about to end in tragedy, Hanna shouted out some last words from the ground before losing consciousness.”We'll definitely win... because we have Nipa with us...” Nikka, previously uncooperative and prone to delinquency, was inspired. Battered, bruised and wounded, she brought all of the newly recruited witches back alive. In an awkward gesture of appreciation, Nikka later brought her a matching sweater in the hospital, a reference to their similar appearance and concreting their close friendship.

Despite her tomboyish appearance, Hanna is well-known and well-liked for her gentle, nurturing manner and soft smile. She is known for loving her country and her friends.

Though she is close to all her squadmates, she shares an especially strong bond with Sergeant Nikka Katajainen, though this is only after some effort on Hanna's part to break through Nikka's rebellious exterior. Both look quite a bit alike, prompting Hanna to have the occasional bit of fun at Nikka's expense: she was once mistaken for the Sergeant during an inspection carried out by a highly ranked commissioned officer, where she just decided to play along and pretend she was Katajainen.

“How to tell us apart...? Nipa has bigger breasts.” 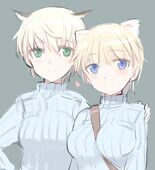