Heidemarie W. Schnaufer (ハイデマリー・W・シュナウファー) is a Night Witch originating from Karlsland. She is known as "The Illusion of Saint Trond"

Karlsland's strongest Nachthexe, near the end of 1944, her shot down count was drawing near to 100 units, all of which were scored during nighttime combat. Within the setting of the Strike Witches' world, she is one of the best-seven witches in terms of shot down count (the other six being Wilcke, Barkhorn, Hartmann, Rall, Marseille and Rudel).

Born in Calw, located in southern Karlsland, which is not far from the national border with Gallia. Heidemaire's magical power manifested itself during her childhood and, since her night eye was quite effective, people expected much of her future as a Night Witch. However, because she could not control her night vision ability during her childhood, she was forced to live constantly in gloomy indoors. Incidentally, her parents were into the wine business and she used to make their dark wine cellar into her playground.

At 10 years old, she was matriculated in a witch development institution and given an education that included how to control her ability. Though her night vision ability would no longer activate accidentally, the damage previously done to the optic nerve could not be restored even with magical treatment, so she usually wears glasses with a very strong prescription.

Her flight aptitude is high and, right after the development school, she took flight training as an air witch cadet. Upon graduation, she was appointed as a Pilot Officer and assigned to the 1st Night Fighter Wing, where she received her Bf110 along with proper training as a Night Witch. Afterwards, when Heidemaire was assigned to the 2nd Flying Corps, she was already appointed as a tactical commissioned officer attached to the Flying Corps Headquarters due to her excellent flight competence and her high ability as a Night Witch.

Even in actual combat, she plays a considerable role in night warfare. In particular, by employing a new technology based on the Lichtenstein-type magic-antenna combined with the Yagi-Uda-type magic-formation, she became capable of grasping Neuroi from long distances and her shoot down count had a sudden rise.

In contrast to having a poor social disposition due to her childhood, Heidemarie's commanding abilities are high and she became the commanding officer of the NJG1's 4th Flying Corps on the same occasion of her promotion to Flight Lieutenant. Later, once she achieves a shoot down count of 100 units, she will be promoted to Wing Commander and become Karlsland's youngest combat wing commander.

When a large-type Neuroi that she allowed to slip through caused the Ghost Witch Riot in St. Trond, within Belgica's territory, she destroyed said large-type Neuroi with the help of Wing Commander Wilcke, Flight Lieutenant Barkhorn, Flying Officer Hartmann and Flight Sergeant Lennartz, who had appeared to investigate the situation.

As a backlash of her lonely childhood, Heidemarie is introverted and sensitive. Because she has no friends of the same age, nor she ever experienced playing around or simply cutting loose, her lifestyle is very constrained. Because she received education as a witch since early, she somewhere has this idea that this is how she is supposed to be. Still, she strongly wishes for friends of the same age, and that is especially obvious in regards to fellows Night Witches.

In the unit she is attached to, Heidemarie is quite popular among superiors and subordinates alike due to her mysterious atmosphere, hard-working qualities and the fact she always looks troubled, but she herself does not realize that. She is also weak in regards to cars.

Heidemarie has a friend in the 501st Joint Fighter Wing (Flying Officer Litvyak), who she exchanged QSL cards for the telecommunications among Night Witches that use magic-antennae during a nighttime high-altitude reconnaissance training in Romagna.

A rare case of a single witch possessing multiple inherent magics, not only she has the magic-radar characteristic of Night Witches, but also a unique night vision ability that allows her to see clearly in the darkness by relying on starlight.

Heidemarie as a child, in the darkness of the wine cellar 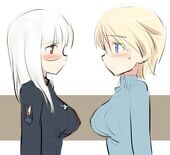 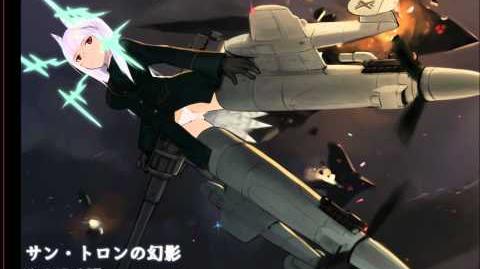