Her lineage stems from Orussian aristocracy which later emigrated to Karlsland. It is a distinguished clan with influence across various European states, some members of her family especially having very deep connections to the royal family of Baltland.

Since childhood, she has undergone austere tutelage in preparation for her calling as both a noble and a Witch. She has a strong sense of justice and will to protect the weak.

Because of her background, she is ignorant of the ways of the world to a certain extent. She sometimes gets childishly excited about seemingly regular things, and, has a tendency to apply the same high standards upon her naturally gifted self as she does others, such as subordinates and maintenance staff, whom she harshly expects perfection from. Natural charisma and deportment have led to a group akin to devotees or passionate fans forming around her.

She is considered talented at seizing the hearts of people due to traits like being generous with appreciative words where they are due despite her own severity. The maintenance crew members have their own game going on: "When you do a maintenance mistake that can still be recovered, she will stomp on you, but that way you get a low-angle view like no other. So we do those little mistakes on purpose, but if you go too far you will get discharged. Trying to keep that balance is very stimulating gambling."

Her shoot-down count has risen with her daring, aggressive style, and she is Karlsland's (and thus humanity's) third-ranked night combat ace. During the defense of St. Petersburg on the night of June 24th 1943 she destroyed four enemy units consecutively, and on July 24th she made a record of six consecutive kills.

While she was in NJG 5, Fourth Aviation Corps, she was praised for her superb performance with destroying 40 enemy units. Right after it was renamed to Nachtjagdgeschwader 100, First Aviation Corps, they were sent to the western front, London, specifically, to defend Britannia. The following year she was promoted to Squadron Leader and was made the commanding officer of NJG 2.

Once Heinrike viewed Flight Lieutenant Schnaufer as a rival due to their similarities in age and accomplishments. After learning of the hardship she (note: refers to Heidemarie, "that girl" in original text) had experienced, her views of her softened and nowadays she secretly thinks of her as a true friend. She helps her behind the scenes without sparing her efforts. Unaware of Heinrike's feelings, Heidemarie has criticism for her: "She is a scary person. Sometimes she is nice to me, but I can't comprehend why at all."

Heinrike initially looked down on the Night Witch radio community as "child's play," but, partly due to Heidemarie's influence, she is currently running a scheme of little by little taking part in it.

Since Kuroda Kunika joined the 506th JFW, she has been mostly paired up with Kunika despite their opposite personalities.

Heinrike uses a MG151/20 with a pistol grip and electronic trigger mechanism. It used to be a defensive emplacement gun, and was mostly used against bombers, a secondary grip and other modifications were added to the weapon in the field so that she could hold it with greater ease. Weapons like this are not often used except by elite or specialized units, this weapon's preferred ammunition is a thin-shelled high-capacity magic explosive projectile (Minengeschoß), so is not as readily available as the regular rounds used by other units.

She is also often seen carrying a Walther PPK, presumably as her personal side-arm, though she owns a Beretta M1934 as an alternative sidearm. Her Beretta M1934 has the 506th JFW's emblem on the grip, as seen in the Movie.

"Wittgenstein has arrived! I hereby claim this battlefield!" 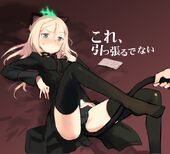 Heinrike's Beretta M1934 in the Movie. It has the Noble Witches's emblem on the grip.
Community content is available under CC-BY-SA unless otherwise noted.
Advertisement