Helma Lennartz (ヘルマ･レンナルツ) is a Witch originating from Karlsland. She is commonly known as "Gelbe 7" (Yellow 7).

A member of the evaluation squad currently performing tests on the new etherjet strikers (commonly known as jet strikers).

Ever since the inception of the Preliminary Evaluation Squadron (Erprobungskommando), the squadron has been assembling accomplished and even elite veteran aces from all over the Karlsland Air Force. At only 13 years of age, and with a relatively short military career, Lennartz's selection was something of an oddity. She was selected in response to the opinion that newcomers who are not very familiar with older units may be easier to adapt to newer strikers.

In 1944, she was dispatched to Maastricht Aachen Airport as a supplement to assist in the investigation during the ghost riot in Belgian Saint-Tron, accompanied by Wing Commander Wilcke, Flight Lieutenant Barkhorn, Flying Officer Hartmann, and Flight Lieutenant Schnaufer, who joined locally. They jointly shot down a large Neuroi.

Lennartz's kill count does not particularly stand out within the Karlslander Air Force, but nearly 70% of her victories were made in a jet Striker, and a large number of those victories were against large-scale Neuroi bombers. Thus, there are high expectations for her to become an ace of the new generation.

Overly serious and methodical, with a somewhat meddlesome personality, Lennartz even nags at the senior aces personal lifestyle, and how they have to hold up their image as air infantry and be a role model for the entire military. Of course, she gets brushed off immediately afterwards, but she is adored by her fellow squadron members as a sort of squadron mascot, especially with the expression she puts on after being ignored. 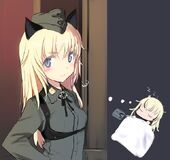