World Witches Series Wiki
Register
Don't have an account?
Sign In
Advertisement
in: Article stubs, Other Characters, Strike Witches IF 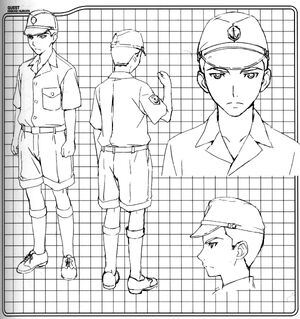 Hijikata Keisuke (土方 圭助) is the right-hand man to Mio Sakamoto. He belongs to the Yokosuka Naval District and holds the rank of Petty Officer (兵曹?) in the Fuso Imperial Navy.

He is usually seen escorting Sakamoto, but at the beginning of Season 2 he is seen acting as a liaison between Sakamoto, who is partially retired, and the Fuso Imperial Navy.

In Fumikane's "What If - Cold Winter 1947" tweets, Hijikata is present alongside Sakamoto during these events.