The Kingdom of Hispania (ヒスパニア ?) is a country in southwest Europe in the Strike Witches Universe. It is based on Spain. Its name in derived from the Roman name for the Iberian Peninsula, Hispania.

There is little known of Hispania, whether they had a similar civil war to the Spanish Civil war is anyone's guess. A series of skirmishes involving early Strike Witches were fought here during July 1936 against Neuroi. The battles were probably of the same situation with the Fuso Sea Incident. The first use of Striker Units in battle was here in 1936. Older backpacked Striker Units were used in the conflict, especially early Bf109s and I-16 models. New Striker Units were also used although this is unconfirmed. A lot of volunteers of Karlsland (the Condor Legion), Romagna and Orussia go to Hispania in a military campaign, and also the International Brigades but a lot of people participated individually. Some Witches (like Angela Salas Larrazabal, Rosalie de Hemricourt de Grunne, Huberta von Bonin, Aurora E. Juutilainen, Vera Moelders, Giuseppina Cenni and Adolfine Galland) participated. There is no canon source about the full situation of Hispania in the Second Neuroi War, but a unit of volunteers (the División Azul) fought in different places of Europe until 1944, so probably they resisted and even were able to send expeditionary forces.

However, what details that are known is that while the Hispanian military was weakened during the battles of 1936; the military made use of the Pyrenees mountain range as a defense line to keep the Neuroi from invading the country; a surprisingly successful tactic. By the 1940s, and with the front lines now shifted to Gallia by that point in the war: Hispania is now one of the few safe countries in Europe and is noted as being a popular place to send wounded to for recuperation.

As it's based in the Spanish kingdom, they should have a small but tough army heavily based on light infantry using close-combat tactics like the "cojones" (approaching to the land Neuroi in order to attack them with grenades and Molotov cocktails), and having small, light tanks as support.

Their nation's air insignia is a small red disk on a larger yellow circle superimposed on a wider black circle outlined, while their flag is a modification of the Spanish flag. 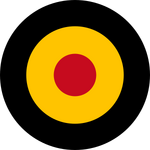 Insignia of Hispania
Community content is available under CC-BY-SA unless otherwise noted.
Advertisement