Iris Monfort (イリス・モンフォート) is a witch originating from Andorra. She is known as the "Heroic Lone Witch".

Iris ancestors have sold fur pelts and breed sheep for centuries. She is Maria's childhood friend. During summer she would trek the mountains, and during winter go skiing with boys and girls her age. Though she would be pulled away from this ordinary lifestyle due to the war.

With the existence of her country at stake, her Witch abilities were discovered and thus she left her home to fight against the Neuroi. Her family was wealthy enough to send her to the Magic Academy in Barcelona, while Maria stayed behind to help her family.

When Gallia was subjugated by the Neuroi, Andorra played an important role in protecting the fleeing Gallian refugees from being pursued by the victorious Neuroi. It was up to the Andorra military consisting of one lone Witch, four staff officers, and six soldiers to conduct this operation of great importance. Thus came the lone witch, Iris Monfort.

She had participated in a Gallian counteroffensive operation, and during the offensive to recapture Gallia, she was given the freedom to join many battles as part of the Gallian military, earning her much fame.

Iris and Maria drove back the Neuroi year after year. The people who passed the town to safety never forgot about the young girls who shielded the refugees to Hispania and protected Andorra. People called the girls "The witches of Andorra".

Near the end of the Second Neuroi War, the Republic of Gallia had forgotten about Andorra's contributions to the war, as the country has technically never officially participated in the war. But to the soldiers of Andorra, and to Iris Monfort, they did not mind such a formality. To them, they were happy to just receive the praise and admiration of the people of their country, and the refugees of Gallia.

Iris was interviewed and photographed by Katou Keiko who later wrote a news report about their story.

Iris is armed with both 20th-century and Medieval Age weaponry. She mainly prefers surprising her enemies, so she uses a long sword instead of a gun. Her secondary weaponry is the Gallian-made, cavalry revolver, the Colt Single Action Revolver (M1873). Her Striker unit is a Gallia VG39bis.

The Witches of Andorra cover 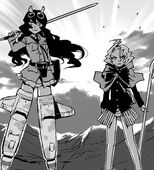