Isabelle is a small aristocrat from Belgica. When the country fell, she and her family emigrated to Britannia.

Isabelle has short orange hair, kept this length due to her childhood raised as a boy. She wears a large brown coat, under which she wears what appears to be a black scarf with thin white stripes. Perhaps due to her boyish nature, she is one of the few witches who wears spats. She also sports a faded green cap.

Her reckless parents wanted to protect their only heir, so they raised her as a boy named Isaac. This is because they thought that if she was discovered to be a witch, she would be considered to be the country's property. Due to her having masculine hobbies such as hunting, she became an excellent shot.

When the Neuroi invaded in 1939, her parents fled to Britannia, with Isabelle fleeing her home amidst the confusion. She volunteered with the RAF whilst hiding her identity, serving as a Pilot Officer, and the flight commander of a Belgican unit. After the liberation of Gallia by the 501st Joint Fighter Wing, she was reunited with her family as the situation in Europe stabilized, however it was also at this time that the RAF discovered her identity. In order to avoid punishment, Isabelle accepted reassignment, and was transferred to the 506th.

Isabelle, who goes by "Isaac" amongst friends, is calm, collected, and has a silver tongue, doing things mainly for her own amusement. This usually includes cracking jokes from old books she's read or playing pranks on the other members of the 506th's A-unit. She appears to be immune to pranks played on her, likely as a result of her experience with them. Even in serious situations, she can't help but joke and tease, seeming to enjoy more the act of telling the joke than the reaction to it, as she once told a joke to an unconscious (and therefore unable to listen) Flying Officer Kuroda. Possibly due to her upbringing, Isabelle seems to have an affinity for cynical dark humor. Isabelle is also incredibly intelligent, showing a knack for detective work, though also putting her brain to good use in thinking up pranks to amuse herself. She's incredibly reliable despite this, staying on the front lines out of a fear of being seen as a coward or being looked down upon, and refusing to run from hardships she faces, no matter how dire.

While usually a calm, friendly girl, she did, for a time, hold a considerable amount of animosity and estrangement towards her father, as she felt that, for all his love and concerns for her: that she was denied her duty and forced to live a secret that denied her the truth of what she really was, as both a witch and a person; having read books that spoke to the bravery of witches. She also felt that living such a life that denied who she was, in her eyes, was living the life of a coward. Though she lived as a boy named "Issac" for a number of years at her parents wishes; at some point she decided to reveal herself as a witch; to choose what her life would be than feel forced and trapped by the wishes of others. Due to her father being unable to understand his daughters choices and fearing for his daughters safety and attempting to find ways for her end her military career prematurely despite her rebuffing; has resulted in Isabelle growing aloof and estranged from her father, even given him the cold shoulder.

Despite the shaky rift between herself and her father; she deep down still loves him, and when he and Kuroda were being attacked by Neuroi; she rushed to save them and was grateful for Kuroda for protecting her father. And after the rescue mission; the road to mending the rift with her father appears to be slowly developing.

While she normally keeps some things about her life and feelings to herself, she surprisingly feels able to share and confide normally confidential things about herself with abnormal ease to Kuroda. It puzzles her, but she feels content having Kuroda as a confidant.

Isabelle is knowledgeable about a great deal of seemingly random information, and seems to have a strong ability to retain such information, such as when she listed off extensive statistics about a baseball player from Flight Lieutenant Carl's hometown, based solely off a book she'd once read as a child. She is an avid reader of books of a wide variety: from detective novels, to witch history texts and even Vogue magazine.

She picked up many hobbies as a child, most notably hunting, which has made her an excellent shot. However, she also has more traditionally refined hobbies, and enjoys playing the piano.

One of her most notable skills is her persuasive speech. Isabelle is incredibly charismatic, and, according to Flying Officer Kuroda, it's difficult to tell when she's serious or not because of her ability to always keep a straight face. This has led to her tricking various people (mostly the aforementioned Kuroda) into her pranks, such as when she managed to convince Kuroda that a rich noble was rewarding her with money when she worked hard, or when she managed to sic Squadron Leader Wittgenstein on multiple people during an investigation, accomplished by merely mentioning Wittgenstein's keen senses while the girl began suspecting people. 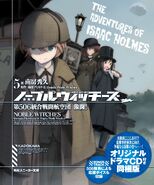 Add a photo to this gallery
Retrieved from "https://worldwitches.fandom.com/wiki/Isabelle_du_Monceau_de_Bergendal?oldid=25645"
Community content is available under CC-BY-SA unless otherwise noted.