Jane T. Godfrey (ジェーン・T・ゴッドフリー) is a Witch of the 504th Joint Fighter Wing, originating from Liberion.

Her birthplace is a metropolis somewhere on Liberion's East Coast. Jane is an ordinary person whose soft-spoken personality causes her to keep getting overwhelmed from every direction, especially by military personnel. This is perhaps due to her relatively untroubled upbringing in an ordinary, middle-class family, who had never produced a witch before.

She was expected to grow up and go to school normally, however, after receiving excellent results in proper tests conducted by the military, she decided to enter a training school for the Army Air Corps. She was well trained, and was an excellent but unobtrusive student, and was sent to Britannia after her assignment.

In Britannia, she was seen to have skills, but lacked assertiveness, and she carried out her duties indifferently. Life changed when Flight Lieutenant Gentile was transferred to the unit. In the beginning, the two were indifferent to one another, however one day she was suddenly assigned as Gentile's wingman. This was because few could keep up with Gentile's personality, and she was impossible to deal with.

She had this to say the first time she teamed up with Gentile:

"When we came across enemies, she charged right in before even getting an idea of how many there were, and kept going at them. Every time we were surrounded and I thought that'd be the end of us, somehow or other we'd make our way through. It was like magic."

Possibly because of this, Flight Lieutenant Gentile requested for Godfrey to permanently be her wingman to their superiors, on the grounds that they had excellent compatibility in aerial combat.

Initially bewildered by such coercion, Godfrey gradually settled into her role as Gentile's right-hand woman ("wife's role" to be very literal, probably deliberate and in line with previous comments on Twitter) both in public and private.

When Gentile refused to return to Liberion after the end of her front lines duties, they both volunteered to the 504th Joint Fighter Wing.

Since then, Gentile and Godfrey have used the same model of Striker Unit, but when Gentile was forced to crash land at the 504th's base, destroying her P-51B, they could only obtain supplies for a single new D model unit. At that time, despite the lower speed of the B model, Godfrey easily performed at the same speed and with the same maneuvers as Gentile, so it is estimated that Jane's skills may be higher than Gentile's.

It's likely that the one most surprised (or exhausted) by Gentile's antics is Godfrey, the ordinary girl who follows her around. She is also close to Pilot Officer Mazzei of the 504th JFW, due to their ordinary personalities.

"Has our Don gotten into something again?!" - Twitter, July 24 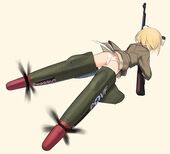