She likes to talk about the fact that she is a descendant of Hispanian nobles who migrated to Liberion. Because of her ancestors she was considered to be a suitable person for the 506th JFW, and was first considered to be assigned to A-unit. However, she moved to Gallia with another Liberion witch, and refused to go to the Sedan base. She wanted to go to the base in Dijon with the other Liberion witches and was assigned to the B-unit. 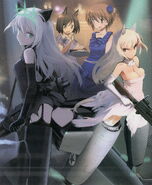 Add a photo to this gallery
Retrieved from "https://worldwitches.fandom.com/wiki/Jennifer_DeBlanc?oldid=25632"
Community content is available under CC-BY-SA unless otherwise noted.