Johanna Wiese (ヨハンナ・ウィーゼ) is a Witch attached with the Karlsland Air Force.

A Witch that served as the commanding officer of the Jagdgeschwader 52 Gruppe I (I./JG52) around the same time Gertrud Barkhorn was the commander of Gruppe II.

At one point, she, Barkhorn, Hartmann and Krupinski had an audience with the Emperor of Karlsland.[1] If Johanna hadn't been there, a hole would have opened in Barkhorn's stomach due to stress during that small trip.

Johanna was away in instructor duties around the time that Barkhorn was in the 501st Joint Fighter Wing, but after the liberation of Gallia she was promoted to Squadron Leader and got reinstated into the front lines.

A diligent, elder sister-type of character, but she is also a natural airhead and exudes an aura of a seductive female teacher. For Gertrud Barkhorn, Johanna is a precious person as a confidant of the same generation as her. 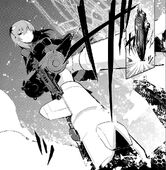 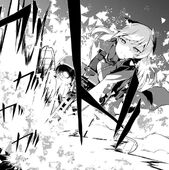