Katou Takeko (加藤武子 ?) is a Witch from Fuso and attached with the Fuso Imperial Army.

Takeko has a great reputation as a commander. During her period in the 1st Fighter Squadron, she received the nickname "Fuji" (フジ), based on an alternative reading of the second character of her family name. Back then, Katou Keiko was part of the same team, so Takeko was called like this to distinguish the two Katou.

At the time of the Fuso Sea Incident, she fought bravely as part of the 1st Fighter Squadron, under the command of Wing Commander Etou Toshiko. A comrade in arms of (at the time) Pilot Officer Anabuki Tomoko, and (at the time) Pilot Oficcer Katou Keiko, the three were praised as the "Fuso Sea Triumvirate". The three are very close friends. She was also an acquaintance of Kuroe Ayaka.

While gaining experience as a commander under the guidance of Wing Commander Etou, she also accumulated achievements in battle, earning herself the epithet "Peregrine Falcon of the Fuso Sea" (扶桑海の隼, fuso-kai no hayabusa). But even back then, she already had no interest in individual military achievements and seemed to have explored tactics as squad-credit. In the aftermath of the Fuso Sea Incident, she became a member of the Fuso Imperial Army Akeno Flight Academy Experimental Company. There, she performed research on new weapons and tactics.

When the Neuroi European invasion began in 1939, she was promoted to Flying Officer as a member of the Volunteer Corps and deployed to the Karlsland front with the advance troops. In regards to that personnel selection, some say that Takeko also had the recommendation from Flight Lieutenant Galland, who she previously had contact with at the time of the Fuso Sea Incident.

Once in the front, she performed operations together with Karlsland troops and tested their Air Force equipment, producing a detailed report. In said report, she made a comparison between the early prototype of Ki-43 brought to Europe and the Karlsland Air Force's state-of-the-art Bf 109, concluding that the Ki-43 should be put into immediate production due its long cruising range and satisfactory mobility. This report, along with the warfare doctrines of the Fuso Sea Incident, had a great influence on the Fuso Army's development and selection of equipment from then on, determining the Ki-43's improvement and early production.

Takeko opposes large-type Neuroi with careful survey, accurate squad command and battle formations that thoroughly abolish individual play. As the squad achieved many military gains, at the same time they obtained Karlsland Air Force's commendation, their bravery as the elites of the Fuso Army became well known in Europe. It was to the point that, when the Volunteer Corps was reorganized into a new force, a documentary movie and music giving praise to the Corps was produced.

Takeko fundamentally prizes painstaking, sound strategies. But, on the other hand, she also happens to have an enterprising disposition for doing things like assertively absorbing European equipment and warfare doctrines. She has a gentle personality, but can also take drastic actions; such as when - out of concern for her close friend - she requested to the top brass that Pilot Officer Anabuki to be deployed to Suomus.

Her hobbies include photography, she was the one that taught Keiko, who would later make a name for herself comparable to Flight Lieutenant Ruspoli. She recommends the Contax.

In the "Attack #1 Operation", during the time of the Fuso Sea Incident, she acted as the wingman of (at the time) Flight Lieutenant Galland (who was proceeding to a new appointment as an observing officer) and employed a Messerschmitt Bf 109E to shoot down a new type of Neuroi with a dive-bombing tactic. Said Striker was an early prototype equipped with the new DB-601 engine.

Takeko uses a Fuso sword in combat. Also during the Fuso Sea Incident, she shot down two units by using a drawing technique with that sword - the "Musou Shiden-ryuu - Sora no Tachi" (無双神殿流・空の太刀 ? lit. peerless shrine-style - long sword of the sky). 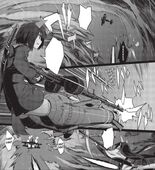