Lewis Gun
Fuso Swords (Kotetsu and an unidentified one)

Kitagou Fumika (北郷章香?) is a Witch from Fuso attached with the Fuso Imperial Navy. She is commonly known as the "War Goddess" (軍神, gunshin).

As an instructor, Fumika has trained numerous Witches for the Fuso Navy, including Sakamoto Mio, Takei Junko and Wakamoto Tetsuko. She would later lead those three into battle during the Fuso Sea Incident.

Sakamoto's master of swordsmanship, she was the one who guided the young Mio, who was faltering about becoming a Witch cadet, into a full-fledged Witch. After Mio became a civilian employee, Fumika continued to guide her as a superior officer. Consequentially, her existence became a huge influence on the girl, who eventually turned out just like her master - starting from hair style to personality and even lack of cooking skills.

During the final battle of the Fuso Sea Incident she was injured, alongside Etou Toshiko, when they fought a navy battleship that wasn't following the plan, putting other witches in danger. She drifted in the sea with Toshiko for 3 days before being rescued. Despite being in a wheelchair for a while, she was able to fully recover.

Possessing a keen mind, Fumika also worked as a naval attaché in Europe, devising new flight tactics and air combat techniques. She was also involved in the negotiations of difficult treaties, which earned her a reputation for her diplomatic skills.

After she retired in 1944, she became the headmaster of the Sasebo Aviation Preparatory School, where Karibuchi Hikari and Misumi Miya were trained[1].

When it comes to swords, her skills are on the level of possessing full mastery of Kodoukan Kendo (講導館剣道), which has a dojo set up at Maizuru where she serves as an assistant instructor. Fumika employs a dual-wielding style and her strength earned her the nickname of "God of War" (軍神, gunshin).

Since she was already a veteran since before the Fuso Sea Incident, Fumika initially employed a pre-Miyafuji Striker Unit that requires a supporting backpack.

She is based on the Second Sino-Japanese War's flying ace Mochifumi Nangou. 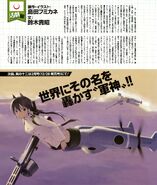 Retrieved from "https://worldwitches.fandom.com/wiki/Kitagou_Fumika?oldid=26437"
Community content is available under CC-BY-SA unless otherwise noted.