Kuroda Kunika (黒田 那佳) is a Witch of the 506th Joint Fighter Wing, originating from Fuso and attached to the Fuso Imperial Army. She wears a purple hakama, a color that only nobles are allowed to wear. She is the protagonist of the Noble Witches series.

Kunika was born in a branch family of a former daimyo house, the Kuroda-marquis House. Because in the end they were just a branch family, any local merchant was more economically prosperous than them. When the 506th Joint Fighter Wing was established, she was sent in after being ushered into adoption by the main family to add some prestige.

She decorated her first battle on the deathbed of the Fuso Sea Incident, in which she shot down 3 Neuroi while withstanding an injury. Afterwards, while she left the front lines due to her injury, Kunika matriculated into a military academy and was later reinstated to her home unit - the 33rd Fighter Squadron - while appointed as a Pilot Officer. With the end of the Fuso Sea Incident, her unit was tasked with the defense of the Fuso Sea district, but because the Neuroi invasion of Europe started immediately after, it departed to a fleet escort mission in the Red Sea district.

With the transport route between the Red Sea and the Mediterranean Sea cut off due to the Neuroi invasion of North Africa, she fought in many battles at the Persian district and steadily increased her shot down count on account of oil field defense missions. She repeatedly repelled Neuroi who flew from Egypt in fierce battles, despite almost no operating machines being available.

Since joining 506th, she has been mostly paired up with Squadron Leader Wittgenstein, despite their opposite personalities. Regardless, or perhaps because of it, the two are close.

Her personality, to be blunt, is more on the commoners-side; easily getting carried away and never putting on airs. She doesn't have much interest in the matters of the upper echelons of society. Due to being very lively, she is popular among old people. It seems that she doesn't understand the wishes of her commander, Squadron Leader Grunne, of having her mediate with the Liberian B-unit. She tends to care a lot about money, but still makes sure to care more about her teammates.

While not the brightest, and prone to being easily tricked, Kunika still has a select set of skills. She is actually a fantastic combatant, with even Wing Commander Preddy being surprised at how easily she managed to dodge shots at close range, especially while still holding a conversation. Another of her skills is an impressive mastery of the Fuso spear, being able to use it effectively even while piloting a Striker. She is even able to overcome opponents with more close quarters training than she has, including opponents older than her. Finally, it appears Kunika has a staggering amount of stamina. Even when wounded, she shows the ability to continue fighting long after most would be able to. This has led her to win battles against healthy opponents while barely clinging to consciousness, and she seems capable of forcing herself to continue standing even with injuries that require near-immediate surgery. 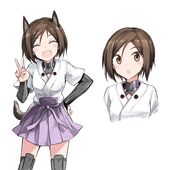