The Liberion Navy is the naval branch of the Liberion Armed Forces of the United States of Liberion.

The Liberion Navy deployed at least one Fletcher-class destroyer in 1943 in an failed attack against the Neuroi. The destroyer was hit by a laser beam and it's fate is unknown. Later, the Liberan navy is seen briefly participating in Operation Mars where four Fletcher-class destroyers are part of a larger Allied task force to protect the Yamato as it attempts to take out the Venezian Neuroi hive in 1945. The lead destroyer for the fleet, USS Nicholas becomes the first victim of the Neuroi's attacks while the three remaining Liberion warships remained on station and continue to protect the Allied fleet until the operation succeeds in destroying the hive.

Additionally, the Liberion Navy also has the carrier USS Enterprise that is one of the three carriers that forms the 508th Joint Fighter Wing to sail the Atlantic and protect Liberion from any Neuroi incursions.

A Fletcher-class destroyer is visible in the top right background. 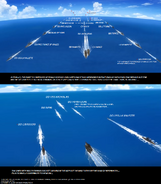 A Fletcher-class destroyer sailing alongside a Britannian battleship
Community content is available under CC-BY-SA unless otherwise noted.
Advertisement