Lynette Bishop (リネット・ビショップ, Rinetto Bishoppu), sometimes "Lynne" to her squadmates, is a witch of the 501st Joint Fighter Wing, originating from Britannia and attached to the Britannia Air Force. She is the younger sister of Wilma Bishop, and the daughter of First Neuroi War veteran, Minnie Bishop.

The fifteen year old Lynette is the only Witch in the 501st who is native to the Britannian Commonwealth, affiliated with the the Britannian Air Force 610th Fighter Squadron and holding the rank of Sergeant, later promoted to Flight Sergeant.

Lynette is the daughter of a wealthy, upper class merchant and Minnie Bishop, a veteran Witch of the First Neuroi War who fought in London. Before joining the military, she was enrolled at an all-girls school, meaning her contact with men was limited.

Her father went to college together with Flying Officer Schade's father, and they competed with each other in sports as well as academics. Patricia's family was friendly with the Bishops during her early years, though Lynette doesn't seem to remember this. Patricia's father sometimes tries to stir up a feeling of rivalry between the two families, but Patricia herself doesn't really seem to care. Her elder sister Wilma has been assigned to Britannia air defense as a witch, and Lynette is seen as having more potential than her sister and is looking forward to the future.

When she joined up, after receiving basic training, Lynette was dispatched directly to the 501st JFW despite being a rookie. Some political speculations indicates that this affair involves the Britannian leaders not wanting to dedicate their home country veteran witch to the Joint Fighter Wing.

She joined the Strike Witches shortly before Sergeant Miyafuji to help protect her homeland. She performed well in training, but was unable to be effective during actual combat. Due to this, she lost all of her confidence. She was expected to back up Flying Officer Clostermann, but due to differences in personalities, their compatibility was extremely poor, and a vicious circle was created due to increased pressure. When Yoshika joined the 501st, she was is assigned to be Lynette's roommate, and the two quickly become friends. Lynette shows Yoshika around the base, but in doing so shows herself to be withdrawn and lacking confidence. Faced with a surprise attack from a Neuroi, Yoshika helps Lynette overcome her fears, laying the foundation for a close friendship. After her first aerial victory, Lynette steadily begins to improve her skills, as well as her confidence.

At the end of the Britannian campaign, she worked to rebuild the ruined country of Gallia alongside Perrine. She later returned to battle alongside the rest of the 501st in Romagna. Shortly thereafter, Major Sakamoto sends her, Yoshika, and Perrine to a remote island on the Adriatic Coast for some intensive training with Anna Ferrara, a retired Venezian Witch who makes a living training younger witches (as the three had been out of combat for six months). She teaches Lynette and the other Witches how to fly with brooms to allow them to better control their magic.

After the liberation of Romagna and the dissolution of the 501st, she returned to Gallia in Pas de Calais to pursue the country reconstruction with Perrine and Amelie Planchard. In addition, she helped to raise homeless orphans cildrens that Perrine had taken up to her mansion . She also became a teacher for the local childrens.

The middle child of eight siblings, Lynette was sometimes overlooked by her family, and developed very domestic and practical habits from helping to take care of her siblings. Because of this, she's very reserved and painfully shy. Plagued by occasional clumsiness, she nevertheless strives to do her best. She's a kind, gentle, and obedient girl who still seems a bit helpless at times and finds no joy in fighting, joining up recently to protect her homeland out of a desire to be of use to everyone. Despite her passive nature, she's strong-willed, obstinate and very reliable.

Apologizing seems to be a knee-jerk reflex to her. Also, every time the squadron chips in to help prepare for a difficult mission, her suggestion is tea, which she's very good at brewing. This also puts her in charge of tea time. Although she is good at housework in general, cooking often fails and she is not very good at it. She is however very good at making candies and sweets to go along the tea.

Her Bust is 88 cm. She cares about her breasts being too big and underreported that the size is "80 cm". She was shocked by the statement that Yoshika said, "The smaller the chest, the better the kimono can be worn."

Her dream is to become a good wife. After she meets Sergeant Miyafuji, the two eventually become best friends. Lynnette have a strong relationship with her. When the 501st received a visit from Adolfine Galland while still assigned to the Britannian base, the witch General approached her and asked if she would be interested in joining her unit, explaining the reason for doing so being a result of "love at first sight". Lynette however declined the offer meekly, saying that she "have Yoshika", but stopped herself before completing her sentence and correcting herself saying that she wanted to do her best in the 501st. During the Gallia reconstruction, Lynette also becomes close friends with Flying Officer Clostermann.

Lynette serves as the squadron's sharpshooter, and possesses the inherent magic Ballistic Stabilization (弾道安定, Dandō Antei). Classified in the Telekinesis lineage, this magic ability allow her to move objects with magic power, wich she apply to bullets to increase the speed, power and extend the range. It can be used not only on bullets but also with balls and other objects, but the control seems to be greatly reduced.

According to Wing Commander Wilcke, "She has the makings of a good Commander with her ability to keep an eye on a whole situation from the rear, and has a good sense of grasping the whole picture".

Lynette principally uses a Boys Anti-Armor Rifle Mk.I in combat, but switched the muzzle brake to one from a Mk.II, as it's easier to use.

Photoshoot just before retirement as Lieutenant. Highest rank is Flt Lieutenant. Although she received officer training as a result of recommendations, her calling was not in battle. After Romagna was freed, she continued exchanging letters with Miyafuji who was pursuing medical study in Fuso.

Lynette's Comments About Other Characters

"Wing commander Minna is refined and kind, and she's reliable so she works well as the cornerstone of the group. She's really a wonderful person. I look up to her and wish I could be more like her sometimes, because I myself can be quite clumsy."

"Yoshika...? I can't do anything right, but although Yoshika just recently came here, she cheered me up and also helped me with my first aerial victory! She's very honest and kind; I'm truly grateful!"

"Major Sakamoto is really strict when it comes to practicing! But she really thinks hard about how to make us new and inexperienced witches into full-fledged ones, so I will do my best! Although it sometimes feels like she's a bit impatient."

"I wonder why Perrine is so hard on Yoshika? Isn't it strange? Well, it's true that Yoshika can be a little careless sometimes, and that Perrine might get annoyed by that, but... Hm? What I think? I don't really know..."

"Lucchini? Yes, she suddenly grabbed my breasts and started to rub her chin against them once... I wonder what that was all about...? Ah, and she likes to play pranks, but she's really a good girl."

"Shirley? Yes, it's like she's Lucchini's mother, isn't it? At first I thought she was a pretty scary person, but she's actually really kind! She's strong, confident and sociable. She's a like a sun!"

"Flight Lieutenant Barkhorn is very strict on everyone, but she's the most strict on herself. She's very serious, and always pays a great deal of attention to her surroundings in combat so she's really great. But... she's a little scary too."

"Flying Officer Hartmann? She's like air... I don't really get her. She's amazing in combat, but otherwise she seems a little dreamy... Though I'm happy she'll happily eat anything I serve her."

"It's thanks to Sanya we can sleep safely during the night. I'd really like to become friends with her, but I'm not really very good at getting to know people..."

"Eila sometimes does fortune-telling on me with her tarot cards but... does that stuff really turn out right? Everyone else says it always turns out the other way but..." 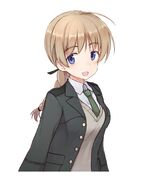 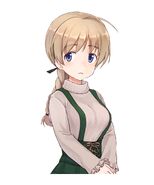 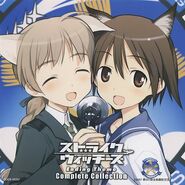 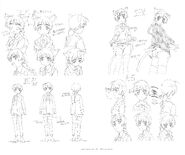 Retrieved from "https://worldwitches.fandom.com/wiki/Lynette_Bishop?oldid=22072"
Community content is available under CC-BY-SA unless otherwise noted.