Eats well, sleeps well, and is growing up fast, she is one of the most energetic witches in the NZ RAF. She loves to exercise and can be found dancing whenever she has spare time. Despite kiwis being flightless birds, she adores it and calls it “Kii-chan♥”.

Within the unit, she is in charge of vocals and dance choreography. 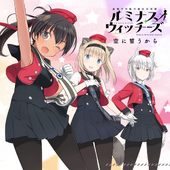