Matilda (マティルダ) is a Witch from South Africa.

Marseille's subordinate. She works as the one taking care of Marseille's room and bar, as well as serving as her bodyguard. She's from the southern part of the African continent (according to herself), specifically from Transvaal, and left her family and friends after having had a revelation to “search for the incarnation of the eagle”.

“Matilda” is just what she calls herself, and her real name, age and birthday are unknown. She has been given land-based striker units, but she does not formally belong to any military.

She always acts calmly and doesn't talk much, but she likes jokes and is usually cheerful.

She can use abilities generally thought typical of those of witches, such as a magic shield and strength enhancement, but she does not need to connect with a familiar to use this magic, so it seems like she uses a magic system different from ordinary witches.

Her normal body is also something extraordinary. Especially her vision and hearing ability is often mistaken for being enhanced with magic.

She has been taught how to use common infantry weapons, but she's specialized in combat using hunting tools such as spears and slingshots. Calling her slingshot an “88mm cannon” might be an exaggeration, but it is actually powerful enough to have no problem dealing damage against small-sized Neuroi. Her spear appears to be an Assegai: a long, light spear or javelin type pole weapon common to South African natives who are renowned in the use of the weapon. She was able to use the Assegai with surprisingly great effect, using magic focused at the tip of the spears point to impale an armored Neuroi and pierce its core, even in but a single blow. The Assegai spear can be utilized in close quarters fighting or be used as a thrown weapon to impale clean though a Neuroi's armor and core in but one well placed throw, and the effect is devastating.

She absolutely refuses to fly, according to herself, because she's afraid of heights. 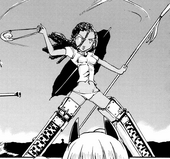 Matilda getting her hair done by Kitano Furuko

Matilda and Ruko with Rommel, Patton and Montgomery

Add a photo to this gallery
Retrieved from "https://worldwitches.fandom.com/wiki/Matilda?oldid=30220"
Community content is available under CC-BY-SA unless otherwise noted.