Sergeant during the Battle of Karlsland, and later Captain in North Africa.

Commanded first a Panzer II tank, then later a Panzer 38(t) during the Battle of Karlsland. While fighting against ground-based Neuroi, he first encountered Friederike Porsche, who at the time was a ground-attack witch flying a Stuka Striker.

Afterwards he became a technical officer and worked with Friederike Porsche in North Africa, where he helped develop the Tiger Ground-Striker.

His real age is unknown since he transformed from a young man in Karlsland to an old-looking person a few years later in North Africa. 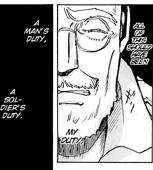