Minna Dietlinde Wilcke is a veteran Witch of the 501st Joint Fighter Wing originating from Karlsland and attached with the Karlsland Air Force. She became renowned as the Ace of Spades (スペードのエース, Supēdo no Ēsu), although some also call her by the nickname of Fürstin (フュルスティン, Fyurusutin), meaning 'Princess'. Her call sign is Pik-Ass.

Minna was born in Posnania, located in eastern Karlsland, near the national border with Ostmark. One theory says that the Wilcke family are the descendants of Anna Wilcke, a singer who was also the second wife of Bach, and because of that they thrive at music, but it is merely no more than a rumour.

Minna is a talented singer; in her youth she aspired to study music abroad at a conservatory in Wien or at the Mozarteum in Salzburg, but had to give up on it on account of the Neuroi invasion. She sang Lili Marleen as a farewell gift for the crew of the departing aircraft carrier Akagi.

Minna often sang along to the piano of Kurt Flachfeld, a young man who lived in a neighboring house in her town who she adored like an older brother. Kurt would later enlist in the army and apply to the maintenance troops in order to follow her into the battlefield. Ever since she lost him in the Pas de Calais evacuation, Minna seems to have a tendency of losing her composure when a decision concerning the life and death of a specially close person is demanded from her and still has issues struggling with her grief to this day.

When the Neuroi first invaded, Minna was a Flying Officer serving as the commander of the Jagdgeschwader 53 (JG 53) 7th Staffel. Then, during the Karlsland evacuation, she was promoted to Flight Lieutenant and became the leader of the Gruppe III of that same unit. It was also around that time that she deepened her friendship with Flight Lieutenant Barkhorn and Flying Officer Hartmann. Later, when the Jagdgeschwader 3 (JG3) was undergoing a reorganization in Gallia, she was appointed as its commanding officer.

After going over to Britannia, Minna proposed the establishment of a Joint Fighter Wing to the top brass. After doing things like selecting the members together with Squadron Leader Sakamoto, she established the 501st Joint Fighter Wing with the backing of Air Commodore Galland and Air Chief Marshall Dowding. After the liberation of Gallia and the disbandment of the 501st JFW, Minna moved to St. Trond Airbase, Belgica, along with Flight Lieutenant Barkhorn and Flying Officer Hartmann, engaging in Karlsland recapture operations.

Ever since the 501st JFW was reformed in Romagna, the time she spent doing desk work became overwhelmingly longer than her time sortieing, and her shoot-down count got stuck on 199 units for a while. She later single-handedly crushed an ultra-small Neuroi that trespassed into the base by herself and was awarded with the Ritterkreuz des Eisernen Kreuzes mit Eichenlaub und Schwertern in praise to her 200th shot-down. This exploit was reported in a grand scale as the embodiment of the Karlsland spirit, to the point that the slogan "Follow Wing Commander Minna!" was propagated for some time. Within the setting of the Strike Witches' world, she one of the best-seven witches in terms of shot down count (the other six being Hartmann , Barkhorn , Schnaufer , Rall , Marseille and Rudel).

She is skilled at leading operations and squad management and, rather than pursuing her own individual military gains, she focuses on the efficient military performance of the squad as a whole. She also has a tendency to look after her subordinates, which causes some to have a motherly impression of her.

Perhaps due to coming from a family that produced musicians for generations, Minna's demeanor is graceful and gentle, overflowing with elegance. She rarely gets angry, but possesses the backbone to stand in direct opposition in face of unreasonableness no matter who the adversary is. Although blessed with resourcefulness and flexible thinking, she is fragile once the last line in her heart is crossed and also has an inflexible side that relies on rules and structure to maintain her mental balance. If peace happens to come, her dream for the future is to become a singer.

Minna has been portrayed as caring and having a strong partnership with Squadron Leader Sakamoto, a comrade in arms from since before the 501st Joint Fighter Wing's formation who often works together with her from a squad management standpoint. This is to the point that she worried about the relationship that Sakamoto, who was then working as an instructor at a training school in Yokosuka, had with her students. Also, because Squadron Leader Sakamoto and Sergeant Miyafuji from her unit often displayed extremely unprecedented behavior, she tends to view Fuso Witches under a mild veneer of resignation in general.

She's also quite close with Flight Lieutenant Barkhorn and Flying Officer Hartmann. She has known them since the beginning of the war, especially Barkhorn, and considers them both as her best friends. She acts like a mother to the rookies, like Miyafuji Yoshika, Lynette Bishop and Francesca Lucchini.

As someone who prefers showers, Minna is very self-conscious and has a hard time dealing with the Fuso-style public baths, which several people use at once. On that note, it seems that she deliberately chooses a time when she can bathe alone. She also seems to like food and drink with an extremely strong taste.

Minna's inherent magic is called Three Dimensional Space Understanding Ability (三次元空間把握能力, Sanjigen Kūkan Haaku Nōryoku). Classified in the perception-lineage, it makes possible to perceive and discern all nearby targets in every direction, sorting out their position, number and classification. It also serves her well as a commander, being useful for noticing small details about others and maintaining unit cohesion (such as appearing suddenly to diffuse arguments). This ability assisted her in performing air-to-air bombing missions. Also thanks to the power of her inherent magic, she can make her subordinates sortie from an aircraft carrier and then reliably bring them back even from a place above the ocean with no landmarks.

Minna is also very skilled in battle, and her leadership in combat is very good. The care she shows to her Captains, and the attributes necessary for a Commander, she has everything that a unit leader needs. On top of that, she is an excellent soldier in an air battle.

When Minna and Erica were stationed at Saint Trond base after the liberation of Gallia, Neue Karlsland prioritized the deployment of new equipment. They received the final production model of the Messerscharf Bf 109, the Bf 109K-4.

Minna's Comments On Other Characters

"I was actually pretty worried about Lynne at first. I took care of her when the Major wasn't around, but she never did well in real battle... However, she and Miyafuji had a good influence on each other, so she's now an important part of the team. She's also very good at brewing tea, so she's in charge of tea time."

"Miyafuji is... a pretty mysterious girl. When she first came here I thought 'Mio brought a strange girl'. Like her mother and grandmother prove, strong magic runs in her family, and her magic is indeed extraordinary. We're especially grateful for her healing magic since we're a unit made of few people with a great responsibility."

"Mio, I mean, Major Sakamoto is someone I rely on a lot. As a commander in the field, and as someone who assists me in the base. She's someone who isn't so concerned about ranks, so I can ask her for help as an individual. Her recklessness can be a little too exciting sometimes though, I wish she would be a little better at following my pace."

"About Perrine... well, I wish she could calm down a little. She is talented and her magic is strong, so she's an excellent witch, but she's over-serious, and she has a tendency to distance herself from others. However, Miyafuji seems to have had some good influence on her ever since she arrived here. I just hope they will become good enough friends to make their frequent quarrels not matter so much."

"Lucchini is really... free. Well, I think her powers wouldn't manifest as successfully as they do now if she was tied up by regulations, so I think it's better to just let her do what she wants. Shirley is taking good care of her, so I think pairing them up like this was a good decision."

"I wouldn't call Shirley's behavior exemplary, but she always cares about everyone and heightens the spirit in the unit. Well, she never says or does anything more than she feels she has to, but she always keeps everyone calm. That is an important role in a mixed unit such as this. So we also want to help her fulfill her dream as much as we can."

"I've known Trude for a long time. We've been together ever since the Neuroi first invaded. It was hard to see her suffer when her little sister Chris got injured, but she has lightened up a little lately, and that makes me happy. I wish I had done more for her though, because I don't think I realized how much she really suffered from it. It seems like I too have a long way to go."

"I've been with Frau for quite some time too. Well, not for as long as with Trude, but she joined us somewhere on the way, and it didn't take long until she was a top ace like the rest of us. She doesn't talk much, and she likes doing things at her own pace, but she is really brave in battle and always performs accurate strikes; she's really fantastic. However, she dislikes the bureaucratic nature of the military, and it's a shame her promotions seem to be lagging behind because of it."

"Sanya is also a vital part of the unit. It's very valuable to be able to leave the night patrolling to her. I was slightly worried about putting her on a schedule where she wouldn't be able to get along with everyone else, but it seems like it all turned out fine in the end since she was able to become friends with Eila and Miyafuji."

"Eila being good at everything really helps out a lot. Her striker unit's abilities and her weapon are more or less the same as ours, and that makes it easier to fly in formation with her. It's usually best to pair up with someone with similar equipment. Her ability to read the future, and the fact she has never been shot down, is also really amazing."

After Group Captain Wilcke fulfilled her heavy responsibility as the commanding officer of the 501st JFW, the army didn't let her go; she went in various places doing observation. Because she used to fulfill the busy duties of a leader every day, just talking with other comrades in arms was very valuable and peaceful time for her. 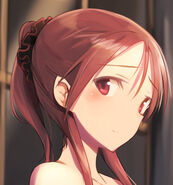 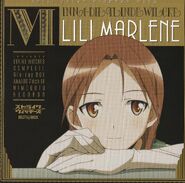 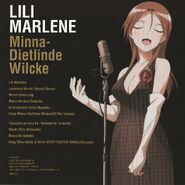 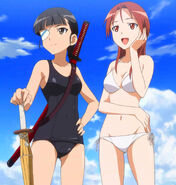 Retrieved from "https://worldwitches.fandom.com/wiki/Minna-Dietlinde_Wilcke?oldid=26625"
Community content is available under CC-BY-SA unless otherwise noted.