Nakajima Nishiki (中島錦) is a Witch from Fuso and attached with the Fuso Imperial Army. A soldier with abundant combat experience, she even participated in the European Dispatch mission. The younger sister of Nakajima Kodaka and older sister of Nakajima Hayate, she was dispatched to 504th Joint Fighter Wing along with Suwa Amaki.

Her parents have connections with the Nagashima Flight Legs, so the whole family - she and her sisters included - cooperate in the development of Striker Units. Nishiki herself was involved in the development and testing of the main combat Striker (the Ki-44). She also cooperated in the development of the Ki-44-III, which equips a Liberion-made heavyweight-class engine, allowing it to be produced only in small numbers. In order to teach how to use new models of Strikers such as these, she often goes back and forth between Fuso and Europe.

When the decision to mass-produce the Ki-44 came, she joined the 47th Company with the goal of teaching how to use it. She accompanied them in the European Dispatch as well and fought together with a deployment unit of Bf 109s in Karlsland. At the time, Nishiki fought together with both Barkhorn and Hartmann... but pitifully, she was completely forgotten by the two.

Her fighting-style stresses power and she mostly employs guns with a high-caliber or with a fast rate-of-fire. She also prefers the "dive and zoom" tactics that she learned in Europe, making them her forte - something unusual in Fuso. Under the influence of this warfare doctrine, she returned to Fuso and received replacement training in the Fuso Imperial Army Flight Evaluation Bureau-affiliated Fuso Academy while the Ki-44-II was being produced.

Overly serious and owner of a one-tacked mind, Nishiki has a personality like that of a frank, bad-mouthed older sister. Also good at taking care of those younger than her, she treats Amaki as if a younger sister. She looks crude, but actually likes neatness. She is often sweeping the base's vicinities or doing the maintenance and weeding of the runway together with the mechanics. 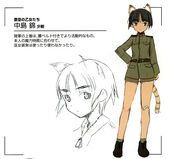 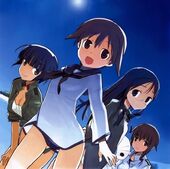 A scene from Silver Wings game

Sōkū no Otome-tachi
Community content is available under CC-BY-SA unless otherwise noted.
Advertisement