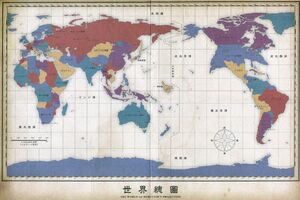 In the Strike Witches universe, the Neue Karlsland (ノイエ・カールスラント?, noie kaarusuranto) is the present homeland of the Karlsland nation. Territory-wise, it is analogous to Argentina.

When the original homeland fell to the Neuroi in 1940, the Operation Bifrost was implemented to systematically evacuate the population to the South Liberion continent. The resulting large-scale, hellish evacuation war sacrificed the defense forces from various places. However, thanks to this sacrifice, the political core and most of the industry was successfully moved to Neue Karlsland. Not only the imperial house, but countless citizens and engineers were evacuated to the new mainland.

There are two marked cities of note in Neue Karsland, which are Neues Berlin and Judenberg.

However, Neue Karlsland's overall territory doesn't just occupy it's borders in the South Liberion Landmass, but also parts of Antarctica. And even more incredibly, those parts of Antarctica that Neue Karlsland does control; houses a secret Allied military research facility that tests experimental striker units and rocket technology, using scientists and scholars gathered from all across Europe to develop them.

Retrieved from "https://worldwitches.fandom.com/wiki/Neue_Karlsland?oldid=21736"
Community content is available under CC-BY-SA unless otherwise noted.