This addition to the World Witches franchise focuses on the 506th Joint Fighter Wing, a squadron of witches tasked with protecting innocent people from the Neuroi following the liberation of Gallia. These Witches are referred to as the "Noble Witches" because of their social status and their dedication to serving the needs of the less fortunate.

The 506th JFW is composed of two units: A Unit, a group of European aristocrats, and B Unit, a group of Liberian witches, which were in conflict with each other. Meanwhile, Kuroda Kunika, a cheerful Fuso witch transferred to A Unit, become a bridge between both units. 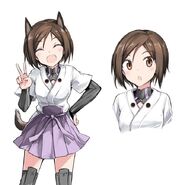