This series depicts the adventures of the 506th Joint Fighter Wing "Noble Witches", established to protect Gallia after the fall of the Gallia Neuroi hive in September 1944. The first three volumes contain the same events as the manga, while the following volumes continue the story.

Some of the volumes have a limited edition release with a bonus audio drama CD, containing the only materials in which the 506th members were voiced, at the exception of Rosalie and Heinrike who were also voiced in the Strike Witches Movie.

Noble Witches Vol. 1: "The Marquis said because I'm from a branch of the family, it's no big deal." Kuroda shrugs... "If you can't behave in a way that suits your blood, you're not eligible to call yourself an aristocrat!". Two completely different Witches are assigned to the 506th Joint Fighter Wing. Two maidens fly in the sky in order to go through Noblesse Oblige! Fully supervised by Shimada Humikane! The long-awaited new series of the popular anime "Strike Witches" has started!

Noble Witches Vol. 2: A large-scale explosion accident that seems to be a sabotage occurred, resulting in the emergence of an internal crime theory, causing the witches to doubt. Kuroda was unwilling to receive the injury and sickness allowance, and was hesitant to investigate the hidden truth of the incident. A unique unit, the second inevitable melee mock battle!

Noble Witches Vol. 3: With Noble Witches official launch event coming up in a few days, Witches of both A and B units are at the mercy of various resentments between countries. Meanwhile, following Jennifer's sudden disappearance with Keera, Kunika and Carla explore the whole Gallia country! Can Kunika and the others get Jennifer back before the start of the show event? The Witch who gained a reputation of being slightly stingy fly over the Strait of Dover with a spear! The 3rd appearance of a unique unit!

Noble Witches Vol. 4: After recovering from her injury, Kunika returns to her normal duties, but suddenly loses her magical power and let a Neuroi escape. Although a doctor examined her, the cause could not be determined yet, and Kunika was perplex. Meanwhile, Rosalie, who learned about the plan to assassinate the General, offered to escort him, but suddenly the unit's radar was scrambled and a Neuroi appeared. A slightly stingy Witch fly secretly in the sky of Gallia and Romagna! The 4th edition of a unique unit is filled with dark clouds.

Noble Witches Vol. 5: Operation Mars is announced! A fierce battle in the sky is coming to regain Romagna! A Unit, which was suspended due to its intervention during the assassination of the General, was strengthening its unity as a unit, but sortying was forbidden. Meanwhile, Operation Mars is issued to 501JFW and 504JFW to wipe out the Neuroi's nest. "This is a fight to regain my country..." Adriana says goodbye to A Unit, which is forbidden to sortie, and fly a plane to Venesia! A slightly stingy Witch pierces the flames! The 5th edition of a unique unit lifts the curtain on the fierce battle.

Noble Witches Vol. 6: Kunika safely returned from Romagna, but she was attacked by a Gallian child who descended from an unidentified transport plane! The 506th chose to subordinate to the Royal Party in exchange of Kunika's security, who became a Republican target in the country. Rosalie and Heinrike start their respective battles against the noblesse conspiracies of each power, while continuing to fight the Neuroi. A slightly stingy Witch becomes a hostage in the chaotic Gallia!? 6th volume of the popular series!

Noble Witches Vol. 7: While being invited to Paris and being welcomed by the press, Rosalie is informed that General de Gaulle's beloved daughter has been arrested. Despite trying to rescue her, if the Witch is involved in the actions of the Royal Party, the survival of the 506th JFW is compromised. While the squad is being chased down by the army, the Neuroi, which threatens the whole Gallia country, also attacks! "Let's do the most noble thing, and the most foolish thing, everyone!" The counterattack of the 506th Joint Fighter Wing, a unit that embodies noblesse oblige, begins!

Noble Witches Vol. 8: Shortly after Heidemarie engaged in a battle near Saint-Trond base, a large Neuroi launches an offensive all over Gallia. In a desperate situation, Kuroda and Heinrike, who saw a slim chance of surviving, charge the Neuroi mother ship! "Let's go, Lieutenant Kuroda!" "Yes! I will make more money than ever!" While the former 501st members are heading to save Miyafuji Yoshika, the story of the fierce battle that is taking place at the same time is revealed. The girl from an ethnic group who was invited to the unit was puzzled by her different status. What is Kuroda's answer to "noble duty"? The stunning ending of the story of the witches who embody Noblesse Oblige!!

Noble Witches Vol. 3 drama CD: OK, everyone. I am Rosalie, the honorary commander of the Noble Witches. Due to the various incidents that happened in Gallia and the unit launch event, the base has been in a chaotic state every day. Meanwhile, I took a look at the journal I am writing since I was assigned to the team, and looked back at my memories with them. It was not so long ago that Ms. Kuroda came to the base... Oh yeah, listen to this CD after you enjoy the original story. This is a commander's order... no I mean, it's an important request from me.

Noble Witches Vol. 4 drama CD: After recovering from the injury inflicted during the Jennifer rescue case, Kunika returns to her normal duties, but suddenly her magical power disappears! Although the doctor and the embarrassed Heinrike examined her, the cause of Kunika's slump could not be determined yet. Meanwhile, at the base, Jennifer and Marian who had developed an interest in cooking, received an unexpected invitation!?

Noble Witches Vol. 5 drama CD: Thanks. I'm the Noble Witches A-unit proud and reputed detective. Isaac, or Isabelle. This CD is an excerpt from the record of the magnificent investigation done by Watson Kunika, police inspector Adrianna, and led by myself. This investigation led to the resolution of the "materials sold on the black-market case". ......Eh? Is this a police intrigue story? Fufufu, you who doubt my ability. Let me show you one incredible reasoning here. My sharp discernment is that you are a nice guy who bought this bundle version with a CD. Yes! You are the witness who observes the details of this case with your own eyes!

Noble Witches Vol. 6 drama CD: Yaho~! Flying Officer Carla J. Luksic, the beloved "chara of the 506th JFW! This time, the biggest crisis will come from B-unit. The commanding Officer of the unit, Flight Lieutenant Geena Preddy, suddenly disappeared. Of course, a search team was formed immediately, the members being me, Kunika and Marian! ......Eh? You're worried about the members selection? Uh ... honestly, I think so too. But it feels refreshing. Then, there is no other choice but to drink a cola! I'll surely find the commander while teasing Marian! Let's go, everyone! Let's go to ghost town!

Noble Witches Vol. 7 drama CD: Over the vicinity of the eastern border of Gallia, multiple Neuroi invaded the 506JFW defense area. Although the witches from A-unit struggle to get rid of them, they are caught off guard by a Neuroi unexpected surprise attack and Heinrike is in danger of being shot down. But, "I will not let you!". Although the unit members got through this crisis thanks to Kunika's rush, Heinrike severely denounced kunika's breach of orders. "Listen, if you don't immediately follow the orders of your superiors, you're disqualified as a soldier, disqualified as a witch, disqualified as a human, and disqualified as a mammal!". "You're going that far!?". The dispute continued endlessly. Adriana and Isabelle, who took the situation seriously, entered as intermediaries, but the two stubborn persons refused to give up. Heinrike spends the night in an agonizing mood and found herself in a depressed state. She thought about the day of the 506th JFW formation ceremony when the members of both A-unit and B-unit gathered together. Heinrike's thoughts on Kunika, at the time the 506th JFW was born and the Witches met, are now revealed! 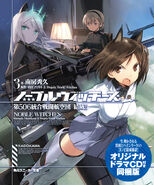 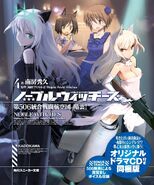 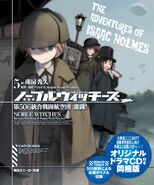 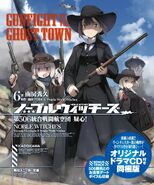 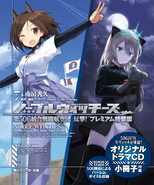