Omar Bradley is General Patton's subordinate serving in the Liberion forces stationed in Africa. He is based on Omar Nelson Bradley, who oversaw the transformation of the 82nd Infantry Division into America's first airborne division: the 82nd American airborne. His real life counterpart also served under General George S. Patton in his first front-line command during Operation Torch.

Unlike his Real Life inspired counterpart: Omar Bradley still seems to hold a subordinate role to Patton as his 'deputy'.

While there is not too much that can be discerned as far as his personality in doujinshi appearance; what can been gleaned is that he is dutiful and conscientious, but is a very strictly "by the book", managerial individual who shows incredulous consternation in Patton's more impulsive, primadonna personality and shirking of orders that the latter finds does not strike his fancy.

The most stark example was when Patton refused to carry out orders to abandon Charlotte Lueder and her support crew to their position fighting against a Neuroi hoard, as ordered by the allied command; asking Patton what they were supposed to say to both Montgomery and "Ike" Eisenhower . He winced in response to Patton suggesting "That Britannian Rat Can Eat Shit" and disparaging the thought of abandoning Charlotte and her Tiger I; in Patton's eye's the young Karlsland Tiger witch was a girl fighting the Neuroi alone. Bradley attempted to reason with Patton plainly about their orders and responsibility, and pointing out, with emphasis; that Charlotte was a soldier fighting. Branley than reminded Patton of his responsibility as a commanding officer and that, given his personality: discipline would be something that Patton would normally love.

However, despite his initial objections, Bradley seems to have ultimately joined Patton in his mission to provide assistance of Charlotte, her Tiger I, and it's support crew; showing that he is never the less a dependable and loyal man.

It's possible that, like his real life counterpart: he may also be a representative of Eisenhower in the field.

Aside from his service alongside Patton during the African Front, he was assigned to serve During Operation Southwind, where he continued to serve as Pattons level headed subordinate. 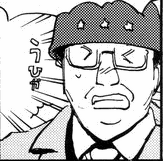 Retrieved from "https://worldwitches.fandom.com/wiki/Omar_Bradley?oldid=30983"
Community content is available under CC-BY-SA unless otherwise noted.