Perrine is a formerly wealthy (after devoting her savings and salary to the Gallian reconstruction effort) and "proper" Gallian girl who looks down upon some of the less-refined habits of her peers. She is the current head of the Clostermann family, the lord of the Pas de Calais county on the coast of the Straits of Dover. The emotional scars left by the Neuroi's conquest of her homeland caused her numerous problems. As such, she often refuses to work as part of a team, and develops a dislike for the upstart newcomer Miyafuji Yoshika due to her attachment to Sakamoto Mio, which eventually develops into full-blown jealousy, even leading her to challenge Yoshika to a duel.

After the fall of Gallia, she withdrew to Britannia to fight alongside the Britannian Air Force. At that time, the shortage of striker units made it difficult to get a chance to sortie, and she felt a little aversion to Britannia. Once the striker units became available, she was assigned to the Forces Aériennes Galliaises Libres 602nd Flying Corps and demonstrated her abilities. She later served as the blue platoon's number one witch, and was known as the "Blue premier" (Blue first), an unparalleled ace in the unit.

It is revealed that her admiration for Sakamoto Mio began after she was defeated by the former fifteen times in a duel while she was stationed with the 602nd. Her original perception of the Major was that she was strange and poorly skilled due to Fuso not experiencing the horrors of the retreat from Gallia. After losing in their duels, Perrine fainted and was taken to the medical ward by Sakamoto. Upon waking up, she expresses her shock at being defeated as well as her desire to return to her homeland. The Major then tells her about the then new 501st JFW and its mission, including the liberation of Gallia. It can be assumed that this prompted her to join the 501st.

After the liberation of Gallia, she worked to rebuild the ruined country with the help of Lynette Bishop. She has gained a reputation in her homeland as a hero of salvation, and is loved by the people. She returned to battle alongside the rest of the 501st in Romagna. Shortly thereafter, Squadron Leader Sakamoto Mio sends her, Yoshika, and Lynette to a remote island on the Adriatic Coast for some intensive training with Anna Ferrara (as the three had been out of combat for six months). She teaches Perrine and the other Witches how to fly with brooms, in order to teach them better control over their magic.

After the liberation of Romagna and the dissolution of the 501st, she returned to her home territory of Pas de Calais to pursue the country's reconstruction with the help of Lynette and Amelie Planchard. In addition, she would eventually care for homeless/orphaned children at her mansion and raise them; she also became a teacher for the local children as well.

Perrine has an inflexible and too serious personality. Because she is very attached to her lineage, she is sometimes haughty, and acts on her high horse. However, she has a gentle heart in nature, and since the liberation of Gallia, she has become softer and more friendly.

Perrine's magic ability, Tonnerre (雷撃 (トネール), Tonēru; French for "Thunder"), consists of a lightning based attack that expands outward from her location striking multiple targets within range. As it uses most of her magical power at once, she can't use it repeatedly without resting. She has complained upon using the attack as it messes up her hair.

Perrine is depicted carrying a rapier in artwork. It was featured on the original figurine, and she waves it about during the fourth Hime Uta album. It finally makes an appearance in Season 02 Episode 09, "The Bridge to Tomorrow". It is an heirloom inherited by the Clostermann family for generations. She uses a Bren light machine-gun in combat.

Perrine's Comments On Other Characters

"Wing Commander Minna? I'm... always a bit nervous around her. She's competent, talented, and notices everything around her, so I just can't stay calm when she's looking at me..."

"Sergeant Lynette? That girl who doesn't stand out? Hmm... Maybe because the two of them are both new, so she's always together with Miyafuji, but she's never really made an impression on me. However, she seems to be somewhat capable in a battle, so I wouldn't mind having her watch my back."

"Oh, what is with that Miyafuji Yoshika! She's always clinging to Major Sakamoto... getting all of her attention during training, and even in the bath! So what if they're from the same country, she should show some respect in what she calls the Major!"

"Ahh, Major Sakamoto... oh, she's so wonderful. Her dignified face, her long and slender legs, her beautiful and exotic black hair... and finally her precise orders during battle... officers as good as that just don't exist!"

"Pilot Officer Lucchini...! Oh, when she's more lacking herself, to have her calling others flat-chested! That's the very definition of rude! All she does is nap throughout the day, this is why Romagnans are all so troublesome... Well, she does show some promise in battle though."

"Flight Lieutenant Shirley, well, she's a superior so I won't say much, but must that Liberion be so carefree? What's more, bigger is not better... well, I wouldn't mind being a bit bigger..."

"Flight Lieutenant Barkhorn... I hate to admit it, but she's better than me. I can't catch up to her in amount of experience or firepower. As a person, she's a bit hard to get along with though."

"I can't rival Flying Officer Hartmann in the sky either. Well, fighting is a disagreeable practice... it's a specialty of Karlsland after all. I'll just leave that to her."

"Sanya? That girl you never know whether she's there or not? It's almost like she's a ghost. However she serves in an important role for the sake of the unit, so I'll commend her for that. It's not something I can do myself."

"Eila... hmm... I really don't know much about her. Believing in something as unscientific as fortune telling... well, even I would like to see the fortune between the Major and me... but what if, what if a bad result came up!? Oh, I could never do something so frightening."

Squadron Leader Clostermann became the commander of the 506th JFW in the new Gallian air force. In 1947 Perrine persisted on declining that position, but as the reconstruction works were going well and everyone wanted her to get it, she accepted. Where were the ruins of her home castle, there is now an orphanage and a school. Group Captain Rudel of the Karlsland air force (retired), with whom she had developed a deep friendship, became an honorary director there. They befriended as they were repairing the herb garden in the memorial park.

This shouldn't be considered entirely canonical, because it was only tweeted by Humikane. Though it should be noted that the friendship between Clostermann and Rudel is based on their real world counterparts friendship after the war. 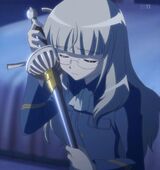