Reppumaru (烈風丸, "Reppu" meaning Gale and "Maru" is a common suffix for Japanese male names) is a sword that Sakamoto Mio forged while driving her magic power into it, this is the Fuso sword that she employed throughout the second season of Strike Witches. A bewitched sword that drains its user magical power, Miyafuji Yoshika almost fainted from magic loss when attempting to draw it once.

Prepared as a countermeasure against the decrease of her Witch abilities caused by age, Reppumaru possesses the power to cut up a Neuroi's beam and its body. Having lost the capacity to generate a magic shield strong enough for the actual battles, Mio also employed the Reppumaru defensively as a satisfactory replacement. A masterpiece that Mio is proud of. However, the result of obtaining the power to fight even while her magic power continued to decay was that Mio's lifespan as a Witch was drastically cut short.

The name of the technique performed with this sword is Reppuzan.

During the decisive battle against the Super-Hive in Venezia, Yoshika used it to destroy the Hive's giant core at the cost of draining her entire reserve of magic. Afterwards, it fell into the sea and was last seen washed up on a beach, along with Yoshika's J7W1 "Shinden" Striker, not far from the Battleship Yamato. Seeing as both the Shinden and Yamato were recovered, with the Shinden falling into Mio's possession and repairing the Yamato becoming her pet project, it can be assumed Mio is also again in possession of Reppumaru, however without her magic it would now simply be a regular sword. 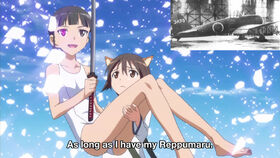 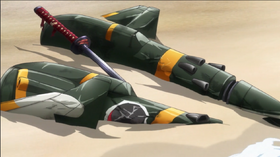 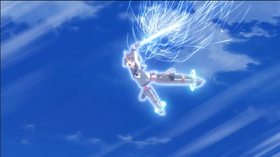 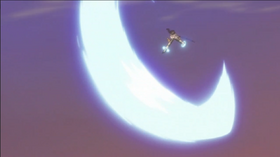