Rosalie was born in Belgica, and is the heiress for two families of earls, one Gallian and one Belgican. She's also in line for the Britannian crown, although that relation is quite distant. She fled the country with her family to Britannia when Belgica was devastated by Neuroi.

She has had a long and valiant military service, having fought in the Hispanian military campaign. She also has a lot of experience, and has received regular training as a military officer.

While she was a Flight Lieutenant, she was injured in a battle in Britannia, and while she was under medical care she was offered a promotion to the commanding officer of the 506th JFW. However, since she was getting close to 20, and therefore retirement, she thought it would be too difficult for her and declined. She was later convinced that there was no one else suitable for the position, and as such she accepted, and was promoted to Squadron Leader.

Due to her age, she doesn't command in actual battles, so command during combat is handled by Squadron Leader Wittgenstein, though because Flight Lieutenant Visconti has a similarly proud and somewhat arrogant disposition, their subordinates are put through various hardships.

Rosalie is mild-mannered and gentle, with a sweet and kind heart and a ladylike set of manners. She gives the feeling of an antiquated "Aristocrat Soldier" who has nothing but good will for other people. At a glance, she looks like a princess from fairy-tales, or rather the tender mother of such a princess. She is also very scrupulous when it comes to tidiness.

Rosalie sometimes struggles with her role as a leader, and tends to scold the 506th softly, begging them not to make her job any harder than it is. Considering the various personalities within the unit, these cries are often ignored. Despite this, she still cares dearly for those under her command. She is also passionate in her beliefs, being that nobility lies in the hearts of everyone. While these beliefs are unusual for a noble, it shows that Rosalie hasn't fallen into the trap of seeing herself as higher than others.

While her magic has waned to the point of being unable to fight, she still shows a fair few skills beyond those of a witch. Rosalie has been said to be a fantastic cook, especially in regards to sweets. Flying Officer Kuroda even claimed she could make a living off of them after retirement. Rosalie also seems to be capable of dealing with very high-stress situations, as she tends to take the heat for her unit when they screw up. Due to her unit's initial tendency to litter the news with incidents, this means the amount of paperwork she does is likely greater than many others in her position. She also seems capable of still acting as a leader during dire circumstances, such as the events leading up to the 506th's official establishment as a unit. This is somewhat odd due to her gentle and easily startled nature, however it seems she has a surprising level of mental fortitude. 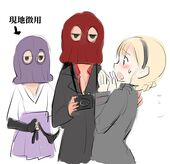 Kunika and Federica coercing Rosalie into taking the above picture 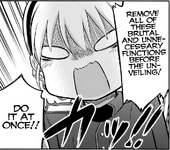