A short-build girl wearing a rubber coat over a sailor suit and a cap with an anchor mark, she has adorable features and big, round eyes beneath her neatly aligned forelocks.

Officially, her familiar is a tanuki. However, during the Character Design stages by Shimada Humikane, she was drawn with a calico cat familiar.

Haruka's hobbies include making sweets such as dango, and her special skill is archery.

Haruka comes from a lineage of Witches that served on the Navy for generations. She began admiring the Fuso Sea Witches after seeing "Flash of the Fuso Sea" and became a Witch herself.

A dropout since the establishment of the Fuso Imperial Navy Yokosuka Flying Corps, which in part is caused by a very poor eyesight. Haruka can compensate for that flaw by using huge, flawless coke-bottle glasses, but stubbornly refused to wear them in front of others due to believing that people would dislike her because of that. Even after she was proven wrong, she still reserved their use to only air battles. Incidentally, its lens are bulky, making it seem almost like she is wearing swimming goggles.

In 1939, Haruka was deployed to Suomus, where she joined the Suomus Independent Volunteer Squadron - that later became the 507th Joint Fighter Wing. Around that time, she competed with Giuseppina Cenni for the attention of Anabuki Tomoko. Also, she briefly transferred to the unit led by Flight Lieutenant Ahonen.

At first, her flight and marksmanship abilities were among the worst, and the name "Misfits" was adequate, but as she gained experience, she demonstrated her strength. In 1942 she defeated the large scale Neuroi "Saxampita". She got a recommendation and returned to her home country to receive Officer training. She was re-affected in 1943. When she met once again with Anabuki, Anabuki's words were "Vacation time is over!". She was promoted to Flying Officer in 1944. She became the third Commanding Officer of the squadron. When the status of the Independent Volunteer Squadron was raised to the 507th Joint Fighter Wing, she took office as the unit's founding Combat Commanding Officer.

Haruka's Striker Unit is an A6M1 12-shi. A test-unit equipped with a Sakae Model 11 magic engine, it would later be formally adopted as the Type 0 Model 11. Its sustained turn performance is high, this is a machine that excels in hand-to-hand combat at low speeds. As a result of short distance takeoff and landing being demanded for the sake of operation in aircraft carriers, it obtained a surprisingly light wing loading and became an excellent dogfighter.

At first, Haruka uses a Type-99-1 20mm machine gun, which was a standard issue for Fuso Navy Witches at the time. However, she would later receive an improved model designated as Type-99-2 20mm machine gun. Thanks to its long barrel, the initial velocity of the projectile is high and the bullet doesn't drop after. Also, the magazine capacity was increased from 60 shots to 100 shots. For self protection, she carries an 8mm pistol believed to be (although not confirmed) a Type 94 Handgun.

Haruka's appearance as a Flying Officer, aged 19 sometime during 1944.

Haruka being mind controlled by a Neuroi Witch

Haruka as a Wing Commander in Brave Witches Prequel LN

Haruka as she appeared in the Character Design stages 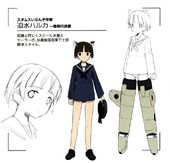