The 501st Joint Fighter Wing Witches take under their wing a candidate commanding officer from the Fuso Empire, Takei Junko. She contacts the 501st to inform them that she will be meeting up with them during a training exercise. At the same time the military announces a new operation: to make a concerted strike against the Neuroi at the Gallian coastline and establish a new frontline base.

The game is composed of a "simulation part" that uses a semi real-time simulation system that makes full use of the touch screen, a "unit formation part" that allows to change and customize units and weapons, and an "adventure part" that depicts interactions between the witches.

Pre-orders of the game received a fake girl's gym shorts DS pouch with their order. A limited-edition also exists and contains an audio drama CD. 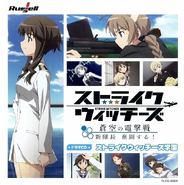