Strike Witches: Der Stern von Afrika is a light novel series starring Hanna-Justina Marseille that was included in the Africa Doujinshi. The stories are told from the perspective of Katou Keiko. Written by Takaaki Suzuki, who was part of the anime staff (Projekt Kagonish), and illustrated by Takeshi Nogami.

The chapters included in The Witches of the Sphinx series were published in both Japanese and English, the English translation being completed by Dan Kanemitsu (creator of The Lionheart Witch series).

This light novel was published in the Witch in Africa doujinshi.

The story depicts the arrival of Katou Keiko in Tobruk in Africa as a war correspondent and photographer. She came all the way to "the end of the world" to interview and collect data on Hanna-Justina Marseille, who's rumors started to spread. She searched for the base were Marseille is stationed, meeting various people along the way.

She finally met Marseille, who looked exactly how she had imagined from the rumors: "Prouder than anyone, more cheerful than anyone, overflowing with more zeal and life than anyone, more romantic than anyone. She was a witch like no other, a heroine straight from an adventure story, or a star in a movie".

The next day, a Neuroi attack broke out, and Marseille and Raisa took off despite being outnumbered. Marseille easily defeated the Neuroi. This gave Keiko, who was following the combat on the radio, the will to fly once again.

The Eagle and the Moon and the Sun

This light novel was published in the Tiger in Desert doujinshi.

The story depicts the arrival of the Fuso Imperial Army African Expeditionary Force in Tobruk, with Inagaki Mami. Katou Keiko, who requested to be rehabilitated as a flight instructor in Fuso, learns that she has been put in command of the Expeditionary Force and will be rehabilitated in active duty. Keiko organizes the squadron and goes to the Britannian and Romagnan Armed Forces headquarters.

As the story progresses, the establishment of a Joint Witch squadron in Africa is made, the 31st Joint Fighter Squadron Africa. Marseille then decides to entrust the command of the squadron to Keiko, who have excellent command and tactic abilities, but especially because Marseille doesn't want to do the paperwork and file reports.

This light novel was published in the Tiger in Desert 2 doujinshi. 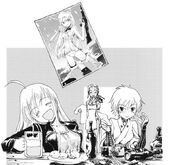 This light novel was published in the Witches of the Sphinx 1 doujinshi.

The story follows the 31st Joint Fighter Squadron Africa members after the unit is established. Marseille wants an emblem to be created specifically for the new the unit, and asks Keiko to make it happen. She comes up with the basic design, and looks for someone capable of drawing it. She finally found out that Raisa Pöttgen is very good at art and asked her to draw the new emblem.

In the meantime, Keiko works on logistics, searching for powerful anti-aircraft guns that will suit Inagaki Mami's magic ability and adapts them to be operated by witches.

A Midnight Dream in the Desert

This light novel was published in the Witches of the Sphinx 2 doujinshi.

The members of the 31st Joint Fighter Squadron Africa and some generals from the area, one being Erwin Rommel, have gathered in the 31st base to hold a drinking party during the night. Marseille asks Mami to translate "I came, I flew, I crashed" for them, a book written by Keiko when she was hospitalized after her accident. Marseille then asks Keiko to tell them the true story of the Fuso Sea Incident, which turns out to be way worse than what she was allowed to portray in her book.

Most of this story focuses on Keiko describing the different phases of the Fuso Sea Incident and her feelings about the events.

Phoenix in the Dunes

This light novel was published in the Witches of the Sphinx 3 doujinshi.

The story focus on Marseille and her new Bf 109G-0 prototype Strike Unit. The 31st members are forced take off to counter a massive Neuroi attack that puts the remaining human forces in Africa in danger. Sortieing with the prototype right away due to her Bf 109F4/trop being serviced, she shot down a good amount of Neuroi, Keiko being unable to keep up with her. Marseille then suffers engine overheat and malfunction. Marseille was unable to regulate the output of the engine, causing it to go on fire. Keiko tries to rescue her, but she had to max out the power output of the engine for too long, and when she finally reaches Marseille, her own engine blows up. Ultimately, Marseille's familiar uses its last strength to save them from the freefall, and dies of exhaustion.