Suomus Misfits Squadron ReBOOT Vol. 1: The story takes place after a Neuroi invasion of Suomus in 1939, a country in Northern Europe. Each country decided to dispatch a Witch to form a new military unit. Anabuki Tomoko, who was active in the Fuso Sea Incident and became a national hero, dreamed of being active in the fierce battlefield of Karlsland, but her dispatch destination is Suomus, a remote country far from the front lines. ".... I'll show them!". Once Tomoko arrived in Suomus, she met her new fellow squadron members who have "no motivation", "no ability", and "no guts". The battle of the Misfits Squadron to protect the world has started.

Suomus Misfits Squadron ReBOOT Vol. 2: The fascination of the beautiful girls for Tomoko accelerates!? The Misfits Squadron struggled with a new land type Neuroi, but Captain Rudel, who was said to be a hero of the Karlsland Air Force, joined them to make a breakthrough. Meanwhile, Romagna decided to enlist a replacement soldier, Lieutenant Giuseppina, who suffers from amnesia. "I'm glad I meet you". The new witch who keeps an eye on Tomoko as soon as possible creates a turmoil in the Misfits Squadron. The jealousy and envy of Haruka grow, and the premises of love between the fascinating beautiful girl and Tomoko appears.

Suomus Misfits Squadron ReBOOT Vol. 3: The Misfits Squadron members, who won the battle against the land type tank Neuroi, are worried about Haruka's changes after she interacted with the mysterious humanoid Neuroi in the previous battle. "But you changed your attitude". It was an observation for Haruka who no longer approached Tomoko enthusiastically. But at the same time, the appearance of Neuroi was confirmed over Lake Ladoga. Tomoko headed to the battlefield in an emergency sortie, but Elma was injured by the unprecedented Neuroi offensive, and Haruka is taken away by the humanoid Neuroi!? The long-awaited third volume is released!

Suomus Misfits Squadron ReBOOT Vol. 4: After the fierce battle, Haruka and Cenni were rescued, and an order to relocate Kauhava base was issued to the Misfit Squadron. "Everyone, we are here to teach the witches trainees!". Tomoko was relieved for a brief moment to retire, but Elma suddenly appointed her as the training leader. However, at the opposite of the expectations of the trainees such as Laura Nissinen, the unprecedented cheating and stealing classes will be held! while the Misfits Squadron spends new ordinary days, they are informed by a man from an Air Force corps that they have lost contact with the 24th Squadron in Suomus central airspace. Tomoko and Beurling headed to the spot: "Tomoko, do you see them? These guys......" and they surprisingly encounter an enemy!?

Drama CD 1: This is Fuso No.1 Witch, Anabuki Tomoko. It's been a long time! I wasn't able to see you yet, but were you doing well? I'll be able to fly in the sky of Suomus again, thank you again! Anyway, O'Hare and Beurling are quarreling over which one shot down the higher number of Neuroi! Eh? I don't understand their reasons, so I'm going to participate in this challenge and win. .........Hey, Haruka! Why are you distracting me, this is unpleasant, why is my body sticky?!

Drama CD 2: Hello everyone! Suomus Air Force Independent Squadron, 1st Class Flight Petty Officer Sakomizu Haruka. I am a useless member since the beginning of the Yokosuka Air Corps, and I was sent to Suomus, but thanks to that, I was able to meet my loved one, Tomoko! Eh? Did you decide to select the best Suomus Army couple in the planning of an upcoming Suomus public magazine? In this case, there is no doubt that I and Tomoko will be the winners! Pilot Officer Tomoko, show our love to the world... Wait! Why did Tomoko and Beurling pair up? Aah, my loved ane-sama, whisper your love to me, not to Ms. Beurling!

Drama CD 3: This is Elizabeth F. Beurling, Suomus Air Force Independent Squadron. The Britannia Air Force has refused to approve and pay the bills for my transfer to Suomus, but it's a base with lots of funny peoples... You asked our unit to do a movie on our personal affairs? Ah, it's fine. I'll make a naked dance for Tomoko. Let's shoot. What am I supposed to do? Besides, can I embrace Tomoko while being naked? Uh, I've not come to the battlefield to die in such a way. Understood. Before that, I want permission to shoot that stupid Fuso girl with a gun. Permission refused? Then at least let me write a testament.

Drama CD 4: Hello everyone. I am Flying Officer Elma Leivonen, Commanding Officer of the Suomus Independent Volunteer Aerial Squadron. We are a gathering of witches that nobody wants, and it seems that we are called the "Misfits Squadron"...... but! Let's do our best to remove this dishonor!! We'll do it! Oh? You are Aurora's little sister... yes, Eila! Did you come to pick up what you forgot? Please wait a moment. Wait, Ursula!! Why are you trying to cause an explosion! Haruka is happily sexually harassing Tomoko, and Beurling and O'Hare are gambling during service hours!? This is no good! Argh, what are you guys doing now?... Eh, you are preparing a birthday party? Wait, aren't those stolen goods!? I don't want to go to jail!! 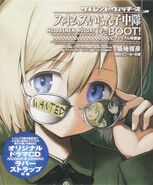 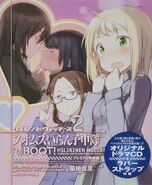 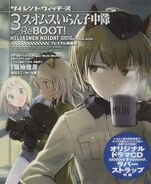 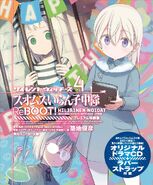